Here’s an interesting model: CN 398000. Scratchbuilt by Jim Stanitz, it is one of about 25 models he has made over the years.
Jim’s goal was to make models of cars that either weren’t available at the time he made them, or never will be. CN 398000 fits both categories; the car is a one-off, and there aren’t many manufacturers keen on making a model of a car for which there was only one prototype! 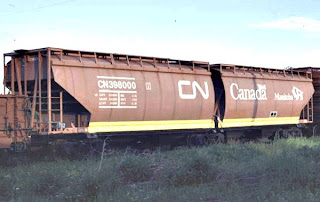 The car was built by CN in 1985 as a prototype for potential use on the line in northern Manitoba to the port of Churchill. (You heard correct; although Manitoba is a prairie province located in the centre of Canada, it has an ocean port in the north that serves ships from around the world. Read more about it and see photos here.)
Since that line is laid mostly on tundra, for years it couldn't accommodate heavier hopper cars. For a long time, rolling stock was restricted to 40 foot boxcars. (It now is able to take the heavier cars.)
CN thought that that one way to use heavier cars on the line was to build an articulated covered hopper. The car, which rides on three 70 ton trucks, could reduce the axle loads of the car—allowing it to operate to the port.


Ultimately, the government of Manitoba decided it was more cost effective to rehabilitate aging 40-foot boxcars for use in grain service, so CN 398000 became unnecessary for use on the Churchill line. It is still in use, though, and can periodically be spotted on trains in Canada and the U.S.
You can read about how Jim built this unique car in the most recent issue of Canadian Railway Modeller.

Prototype photo from CN Lines.
Posted by JDL56 at 7:53 PM