Fantasy Schemes II, or Can You Believe Those Steam Locomotives? 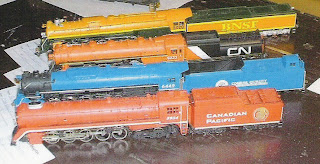 Seven years ago this summer, we hosted Golden Rails 2005 here in Winnipeg to celebrate the 50th anniversary of the Winnipeg Model Railroad Club.

There were many highlights at that convention. But one that stands out for me was the unique steam locomotives painted by B.C. modeller Mike Barone--as seen above.

Mike painted the brass steamers especially for the convention; he planned to paint them back into their more standard schemes when it was over. But now you know what CN, CPR, BNSF and Conrail would have looked like if steam had survived into the 21st century.

Speaking of unique fantasy schemes, the unit below can be found on the layout of the Selkirk, Man. model railroad club (conviently located near the scrap yard): 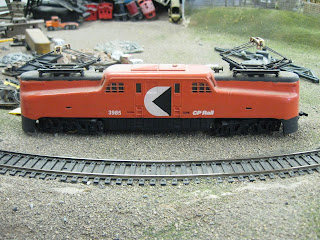 My friend Norm, a dedicated Pennsy modeller, calls it an "abomination." Maybe, but it sure is unique, too!

Photo of Mike Barone's steam locomotives by John Johnston from the July/August, 2005 issue of the Canadian Association of Railway Modellers newsletter The Canadian.
Posted by JDL56 at 8:18 PM