Hiding the Hole, Part 2 (or, a basic primer on working with Styrofoam)

In a previous post, I wrote about my efforts to hide a hole in the wall. The hole is in the wall between the layout room and the storage room containing the staging yard. Here's the hole I needed to hide: 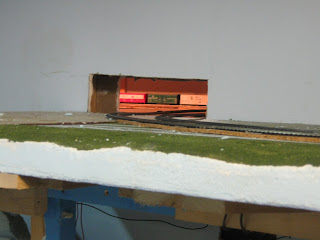 I used a four-inch thick piece of extruded Styrofoam which I just happened to have on hand--I had found in a garbage pile at a construction site a number of years ago. I kept it, thinking it might come in handy some day. It did.

I carved the Styrofoam with a handsaw for the basic features, and used a Stanley Surform to give it a final shape. 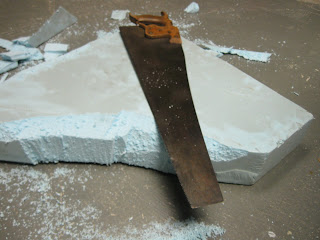 Yes, working with Styrofoam create a mess (although not as messy as working with plaster). A Shop-Vac is a must! But don't throw away the bigger pieces that you carve off--they will come in handy later.

After carving a couple of pieces of Styrofoam on either side of the hole, I test-fitted them and glued them down. A piece of balsa wood stands in for where the bridge will be. The double stack container car ensures that I have enough height underneath the bridge. 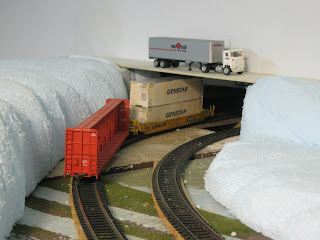 Next up: Adding more land forms--this is where those small pieces leftover from the big carving come in. I assembled them to make ridges and to create transitions between the larger forms. They were glued and held down with nails until the glue set; when dry, the nails were removed. 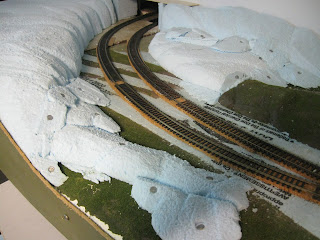 After that I covered the cracks between the pieces (and the nail holes). For that I use cheap spackling paste (the kind used to fix cracks in sheetrock walls).  I apply it with a popsicle stick.  (The brown paint was left over after painting the rails; I didn't want to waste it, so I spread it on the terrain.) 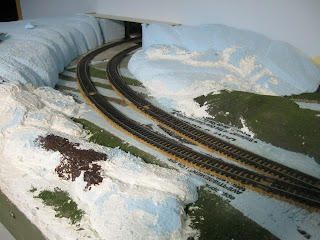 I also finished off the edge with fasica (left over from when I tore down part of the layout). 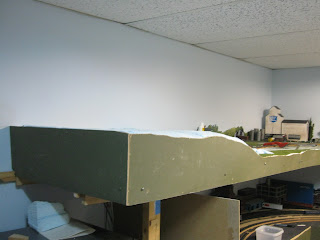 A bit more about those left over Styrofoam pieces; they also come in handy for filling cracks in hills (e.g. where the Styrofoam doesn't sit flat), or cracks between the edge of the layout and the fascia (especially where it curves).

Next up: Ground cover. For that I will paint the Styrofoam a mix of brown, black and white latex paint (it has to be latex) to create different shades, then sprinkle on Woodland Scenics ground foam. After that I will ballast the track and add rip rap of various sizes along the bottom of the hill. Polyfibre sprinkled with ground foam will hide any remaining cracks or imperfections. I'll add some backdrop trees, then  plant "real" trees, and, finally, build the bridge.
Posted by JDL56 at 1:55 PM