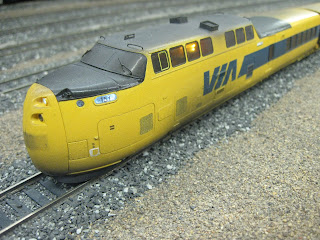 In late June Jason Shron of Rapido Trains made his annual summer pilgrimage to Winnipeg. While here, he visited the Selkirk Model Railroad Club, located in the city of Selkirk about 30 minutes north of Winnipeg. (And the place where the CPR was originally supposed to cross the Red River, until Winnipeg's city fathers cut the railway a sweet deal that caused it to turn south. Read about that bit of scurrilous 19th century politics here.)


But all is mostly forgiven in Selkirk, even if it remains a much superior place to cross the Red River (it doesn't flood there). And Jason enjoyed an evening running trains on the Club's layout, including his own personal Turbo. 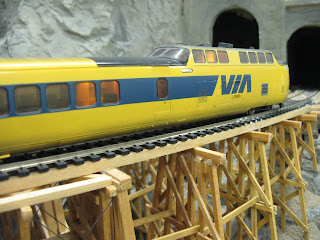 The Turbo, VIA set number CN 2, features new power trucks; painted headrests, armrests, cupboards and counters; new etched grills over five of the intakes; weathering, including the signature nose smudge); and the "masking tape" around the sand filler hatch, and the grabs on the dome roofs. He also removed the weights from all the ICs and added weight to the noses and in front of the controls in the PDCs.


Says Jason: "If only I knew then what I know now, our production Turbo model would have been very different . . . "

While at the Club he also did a bit of maintenance on a Club member's Canadian; nothing like having the owner of the company stop by for a bit of customer service!


I made a short video of the Turbo on the Selkirk Club's layout; click here to see it on YouTube.
Posted by JDL56 at 6:32 AM