The CP Rail M & M Sub. punches through walls in my train room six times. This means I need to hide the holes. How best to do that?

The easiest way to hide holes is by using tunnels. I did that for four of the holes. (It’s a bit of a stretch for a railway that runs through Manitoba and Minnesota to have tunnels, but sometimes reality has to give a little when fitting a layout into a room. Besides, the tunnels are in the more rugged Canadian shield portion of the layout—making them a little bit more plausible.)


A tunnel is not a solution for the top level, however, where the tracks leave the layout for the upper staging yard. That area represents the flatter land of Manitoba—not tunnels there!

The first thing I did to disguise the fact that the tracks leave the layout is build a view block. In this case, it’s a four inch high hill that prevents people from even seeing the hole from most viewing normal positions.


But what if someone wants to look down the track to see trains enter the layout? For that I plan to use a bridge to disguise the top of the hole. Right now, it’s just a piece of wood across the top of the hole; later I will add supports and railings and whatever to make it look like an actual bridge. 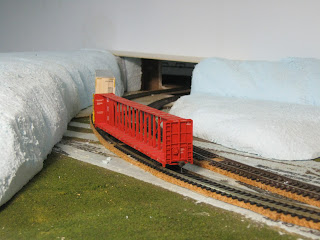 Something else that will really help will be trees—lots of them. They will help create a tunnel effect as they are planted between the viewer and the tracks. This will also help occlude the hole in the wall. Trees will also help disguise the fact that the road turns off into the wall, and falls off the edge of the layout!

All of this work is because I tore down part of the layout; it's giving me something new to do, plus some new problems to solve—like the hole on the first level (as seen in a photo above, behind a view block). That will be an interesting challenge.
Posted by JDL56 at 10:34 AM