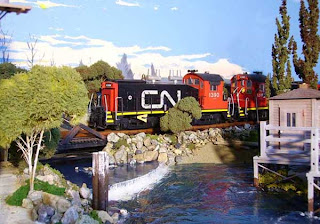 To date, I have featured great Canadian model railroads in N, HO and O; the Winter Valley is my first G scale offering. And what an offering it is!

The Winter Valley Regional Railway began back in 1972 as an N scale prairie branchline. In 1999 it grew to G scale. Today the WVRR can be found in the basement and backyard of Dave Winter’s B.C. home. 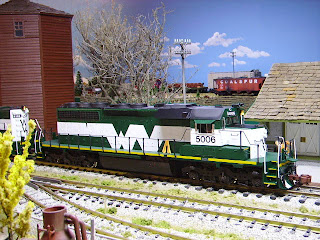 The WVRR has two divisions—the outdoor Mountain Division and the indoor Interior Division. The original Mountain Division was 40 by 15 feet. There was little or no actual grade; the low section of the scenery was a dry streambed just outside of the town site, and the high area was a collapsed section of hillside Dave tunneled through. The building of a new home caused the abandonment of that Division and the creation of a new line that wanders through the roses and meets all the necessary spousal specifications. 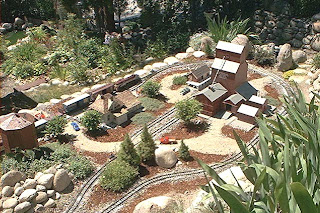 The Interior Division occupies all of a 42 by 45 basement and represents a prairie shortline in September 1975. There is no physical connection between divisions due to the 6 to 8 foot difference in grade, not to mention a concrete wall, but they often share the same rolling stock and budget. The Mountain Division is an all steam operation, using small Aristocraft and Bachmann power. 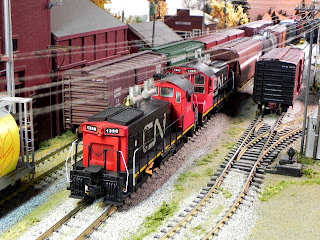 All the diesel locomotives running inside are from USA Trains. Dave modifies all them in some way, mostly by painting and adding detail parts, but CN GP38-2 has a scratch built Canadian Safety cab and the pair of NW2's have been extensively rebuilt into CN style SW1200s.

Streets on the WVRR are made from 3/4 inch MDF board. Dave paints them a light grey colour, then darkens them with coloured chalks in all the appropriate places. Centre lines and intersections are masked off and painted. Road signs are usually downloaded from the Web. 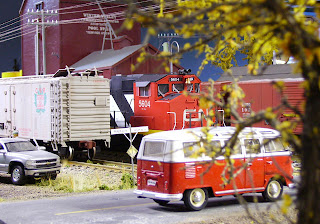 The fall trees are made from sage bushes from Dave’s neighbourhood. The ground cover is from Woodland Scenics.

The layout features many of Dave’s scratchbuilt structures, such as the CNR 3rd class depot. Dave built it from plans and photos from books and magazines; it resided outdoors on the Mountain Division for two years before coming indoors in 2001. 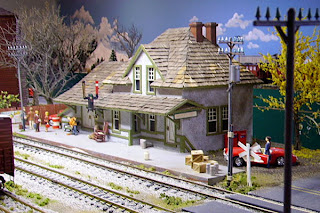 Dave made the station from 3/8th inch marine grade plywood. The ‘stucco’ finish was made by brushing a heavy coat of paint over small areas and then dusting that area with HO scale ballast while the paint was wet. The shingles were had cut from a piece of cedar fence paling. Since it was originally intended for outside, it was given three coats of Varathane clear plastic. 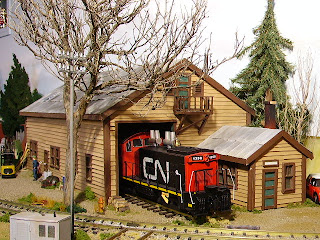 Dave kitbashed two commercial structures to make them look both unique and more realistic but all of the others (about two dozen) are built from photos and 1:1 plans of actual buildings that exist, or existed, in prairie towns throughout the West. He uses MDF, cutting out windows and doors and building up decorative exterior features with photo board or plastic. 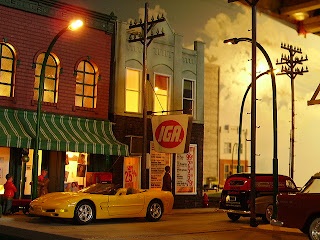 One of the things that continues to irritate Dave is the toy-like colour and profile of Aristocraft and LBG rail. He partly blames himself, having chosen to go with code 332 rail very early on in the project because, as he says, “I was too cheap to buy the good stuff.” During the first few years, he managed to live with it, but now it really jumps out at him—especially in pictures. Now Dave spray paints the track a darker colour in every new scene to make it less toy-like.


Another thing that annoys him is the limited offerings when it comes to 1//29th-scale figures. He's not fond of Aristocraft’s childlike figures (clowns, policemen, hobos and very unattractive brides), so he selects figures from Preiser, even though the scale is off by about 10%. 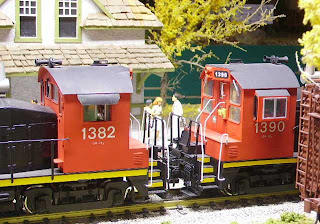 Below find some more photos from the Winter Valley. Enjoy! 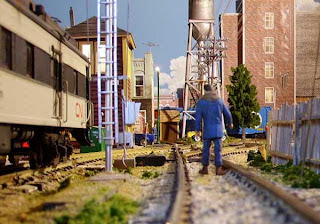 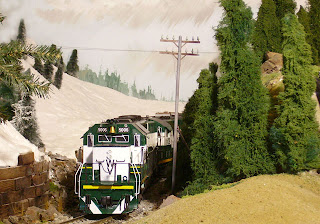 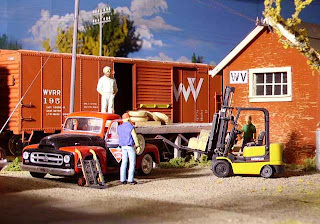 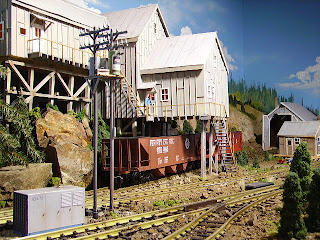 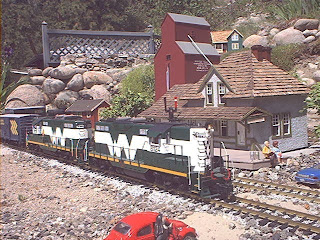 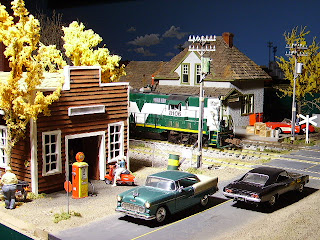 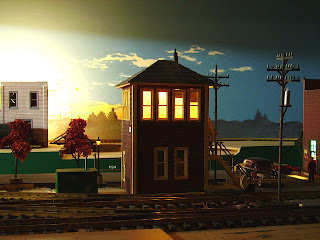