Another master when it comes to backdrops is Tom Johnson.

Like Steven Flanigan’s Louisville & Wadley Southern, Tom’s Logansport & Indiana Northern has some of the best backdrops I’ve ever seen.

Particularly notable is the convincing way the roads on Tom’s layout meld so perfectly into foreground scenes. 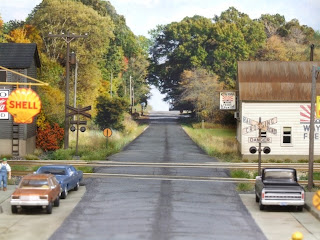 Where the backdrop road meets the layout, Tom paints the modeled road the same color as the road in the backdrop.

He uses the same colors to add a bit of paint on the bottom edge of the photo, blending it as he goes up the photo.

Says Tom: “First of all, I build up a fillet where the road rises up into the photo. After making the modeled road, I paint it with acrylics to match the color in the photo. I even paint the modeled road color right onto the bottom edge of the photo to help blend it in.” 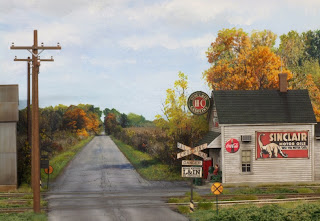 He does something similar on other areas of the layout, dry brushing the ground cover and often the bottom edges of the photo backdrops to blend the two together.

For more information about Tom’s techniques, check out the Oct. 2010 issue of Model Railroader. 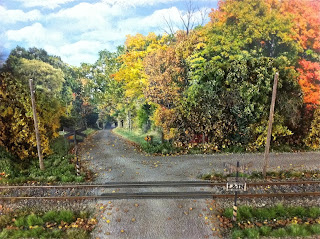 Labels: Other layouts, Tips and Tricks