What’s Wrong With This Picture? 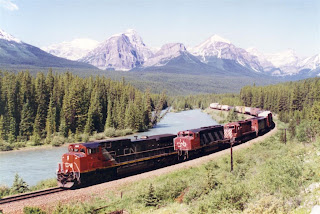 Any serious Canadian railfan knows that this photo was taken at Morant’s Curve. The area was named after famed CPR photographer Nicholas Morant, who took pictures of that railway’s trains from 1929-81. He like taking photos at this location near Banff, Alberta so much that it was named after him.

So there’s your first clue; the answer should be easy to guess. That’s a CN train on CPR tracks at Morant’s Curve!

I don’t know how often this has ever happened, but Grant Bailey was lucky enough to catch it on July 7, 1996. He was driving through Field, B.C. when he spotted an eastbound CN freight train leaving the yard.

Says Grant: “Obviously, CN had some sort of problem because they were detouring trains over the CP. Now this would warrant a stop at Morant's curve, the famous viewpoint between Banff and Lake Louise where world-renowned company photographer Nicholas Morant captured so many breathtaking images of CP trains snaking their way through the 'S' curves along the Bow River.”

After a brief wait, the CN train appeared around the corner and he got the photo. 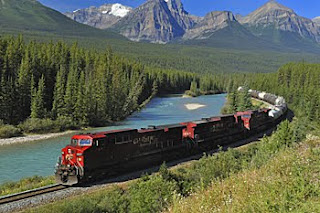 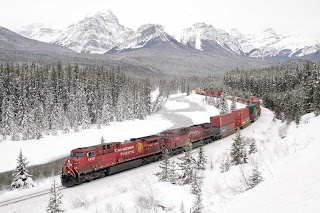 But maybe not this! 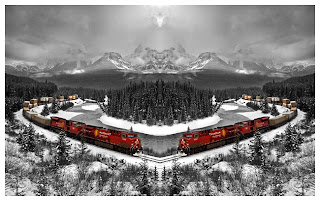 (On the other hand, this mirror image sort of looks like a Valentine; it might make a great gift for that special someone in your life.)