Putting on those @#$%&$!! Kadee coupler springs 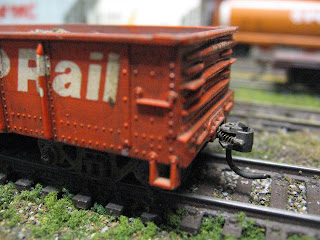 HO modellers know only too well the frustration that occurs when you have to try to replace a spring on a Kadee coupler.

Not only are those tiny little springs hard to put on--they sure can fly a long way when they spring off the coupler. And forget ever finding them. Impossible!

One way to avoid seeing them fly off into space during replacement is to use a trick I learned from my friend Ron Einerson. When he has to replace a spring, he first puts a dab of white glue on the pin on the shank of the coupler, then puts on the spring. He lets the glue harden, then slips the other end over the pin on the knuckle.

When that's done, he puts another dab of glue on the other end, and lets it set. Voila! No more lost or flying springs.

Of course, the trick is to only use a little bit of glue, and to be careful not to get any on the coupler itself.