One of the Thin Places 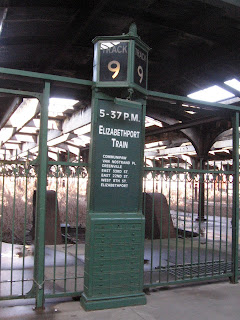 The ancient Celts called them “thin places”—places where the space between heaven and earth, or this life and the next, were thin enough to let people get a glimpse of the other side.

I was in such a thin place last April—for a railfan, at least. That's when I traveled through the old Central of New Jersey Railroad terminal in Jersey City, across from Manhattan.

The terminal is a gateway to the Statue of Liberty and Ellis Island, and then to New York City. It’s mostly empty now, but until 1967 tens of thousands of people transited through it each day.

Built in the 1880s, the terminal's opening coincided with the largest period of immigration in U.S. history; from 1890 to 1915 9-12 million immigrants were processed through nearby Ellis Island, entering the country via the terminal.

By the turn of the century, the terminal accommodated between 30,000-50,000 people per day on 128 ferry runs and 300 trains. In 1914, the train and ferry sheds were enlarged to accommodate the growing numbers of commuters; the train shed, which still stands today, housed 20 tracks.

It’s all mostly quiet now, except for tourists and school trips headed to the Statue of Liberty and Ellis Island. The tracks are pulled up, and the platforms and roadbed are derelict and overgrown. But as I stood there in the sunlit concourse, and listened really quietly, I thought I could hear the voices of those millions of people who had streamed through the terminal in days gone past, headed to work, home or to new lives in a new country. 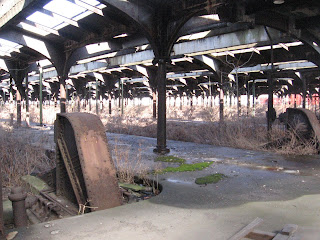