The Railway Line That Made Winnipeg


A young friend recently asked me about the Northeast Pioneer’s Greenway that passes close to my home here in Winnipeg—didn’t it used to be a railway line?

It did, and not just any old railway line.

It’s the line that made Winnipeg into the city it is today.

As I have written about earlier on this blog, until 1881 the Canadian Pacific Railway—the first transcontinental railway in Canada—planned to cross the Red River at Selkirk, MB on its way west to the Pacific Ocean.

The plan made good sense. Selkirk, unlike Winnipeg, was at a higher elevation above the Red River. As a result it had never flooded, as Winnipeg had done many times before.

But the people of Winnipeg realized that if the railway went north, though Selkirk, their community would turn into an unknown backwater.

They made an offer of free land and no taxes to the CPR if it would turn south and pass through their city.

It was an offer the CPR couldn’t refuse.

And so, just a few miles from Selkirk, the railway turned south towards Winnipeg—and the rest is history.

(In 1907, the CPR built the Molson Cutoff, which shortened the distance to Winnipeg. See map above from Fred Headon's book Railways of Winnipeg, Vol. 1.)

Until 2005, the line (known as the Marconi Spur) was a branch from Winnipeg to a refinery north of the city. It also connected with a yard north of Transcona. 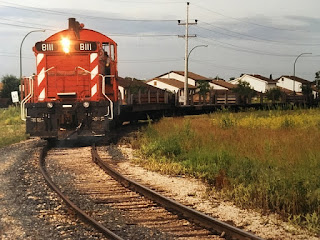 That year, the tracks were torn up and replaced with the very popular Northeast Pioneer’s Greenway.

While in operation, the line saw regular service, including servicing a few industries along the line (e.g. Palliser Furniture and Al-Mar Distributors, where I unloaded boxcars of finished lumber in the mid-70s). 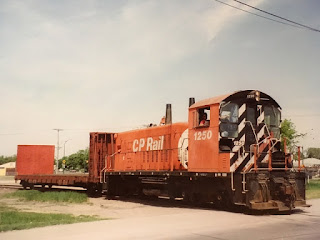 Tracks between Talbot and Kimberly also served as a storage yard for various pieces of rolling stock. 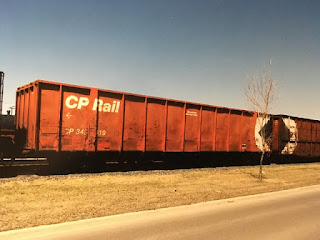 Looking back, I wish I had taken more photos while the line was in operation. I could only find three in my collection.

Today the Greenway has signage about the area it passes through, but nothing to indicate how important it was to the creation of Winnipeg.

That’s unfortunate. It might be one of the most significant historical places in Winnipeg.

After all, if it wasn’t for that old railway line, we’d be cheering for the Selkirk Jets today.

Read more about the coming of the CPR to Winnipeg on the Manitoba Historical Association website.