Coming Up on 1 Million Views 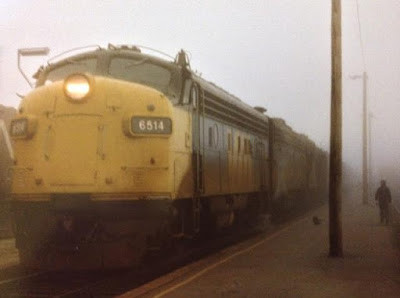 It's in the home stretch now; earlier this week the blog passed 990,000 views. By early to mid-January, it should hit the 1 million mark.

One million! I never would have believed it when I started the blog back in 2009. I created it just for me, as an outlet for my interest in writing and a bit of photography.

If nobody visited, no problem; I would still have fun.

I started by writing about my layout, but along the way I branched out into the prototype and various other train-related things.

One of the most satisfying has been the Great Canadian Layouts series. I've enjoyed highlighting some of the great modelling of Canadian railways being done by people across Canada and around the world.

The deaths of several modelling friends got me thinking about death and model railroading, leading to another interesting series of posts titled Death and the Model Railroader. I don't know of anyone else writing on that topic!

I also enjoyed writing about photography, and the philosophy behind it; about tips and tricks and, of course, about the Manitoba & Minnesota Sub. itself.

And it's been great to follow along with the start and success of Rapido Trains, and to see all the great new Canadian products come out from other manufacturers.

It was also a pleasure to be associated with Canadian Railway Modeller, and to witness its positive impact on the hobby in Canada.

How long will I keep up with the blog? Good question. The fact it has gone on this long is already unusual; the majority of blogs die after a few months when people tire of writing for them.

I'll keep doing it as long as it's still fun. The nice thing about the blog is that there are no deadlines, no expectations, no rules to keep. It's sort of like a layout, in that regard.

Anyway, I'll keep watching the counter until that magic number rolls around. Thanks to all who helped the blog reach it.

Photo above: VIA's The Canadian somewhere in northern Ontario in 1981. My wife and I rode this train home to Winnipeg from Toronto following our after-wedding in my home town of St. Catharines.