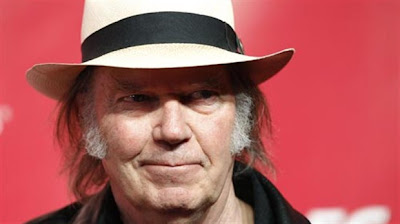 Young's interest in model railroading started in his childhood.

"My dad built an L-shaped layout for me with a Marx Santa Fe diesel set," Neil recalled in a 1993 interview with Classic Toy Trains.

"I dug that train like you wouldn't believe. We couldn't afford Lionel--I think I was 12 or 13 when I finally got my first Lionel locomotive, a No. 2035. Until then, it was those hook-and-loop couplers all the way."

His love trains continued into adulthood, and took an unexpected turn after the birth of his son, Ben, who has cerebral palsy. Young built a layout at his ranch as a way for him and Ben to spend time together.

"It was developed with an eye for doing a lot of things with my son," he explained.

Ben's inability to use regular controllers prompted Young to experiment with different forms of control, which led to his interest in developing new model railroad technologies such as the TrainMaster Command Control system and RailSoundsII.

In 1995, Young was part of an investment group that bought Lionel itself. 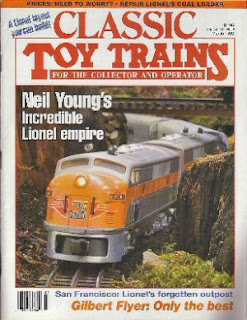 But don't go looking for websites featuring Young talking about Trainmaster Command Control or RailSoundsII. For that you have to search for Clyde Coil--Young's model railroading persona and alter ego.

Coil has a website called Coil Couplers of America, which features information about the products, often written in Coil's folksy down-home way, including use of the word "dang!"

Clyde has also posted a couple of unique video on Youtube. One is titled It's a Fake. It is reportedly shot on Young's layout.

In Episode 2, Clyde learns about new model railroad technologies. (There are suggestions that the voice of Clyde in both videos is none other than Young himself; you decide.)

Earlier, I wrote a post about Young's layout, with a link to a New York Times article about it.

A P.S. about Neil Young: He was born in Ontario, but grew up right here in Winnipeg--where he developed his musical talent and started his career as a musician. In 2008, when Bob Dylan was in town, he turned up at Young's old childhood house and asked the current owners for a tour.