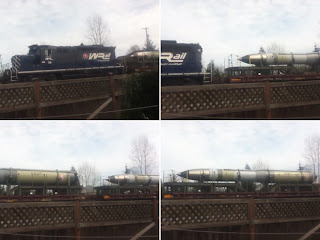 People on B.C.'s Vancouver Island were taken aback this week when they saw a missile train--a train with a couple of U.S. missiles on flatcars.

Not to worry, though: War had not been declared, and the U.S. had not taken over Canada. The missiles were props for a new Godzilla movie.

According to a story in the National Post, the the missile train was first seen in Vancouver, before being loaded on a barge and taken to the Island. 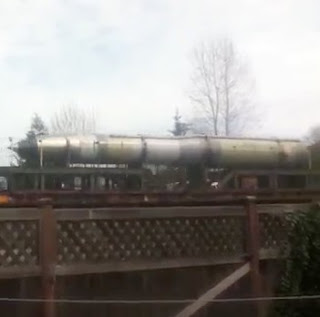 It was accompanied by an armed escort of Humvees, actors dressed as U.S. soldiers, a crashed helicopter and burned-out cars.

A YouTube video posted on March 28 shows the train interrupting a backyard gathering.
Posted by JDL56 at 8:47 PM