Another Guy with a Real Train In His Basement 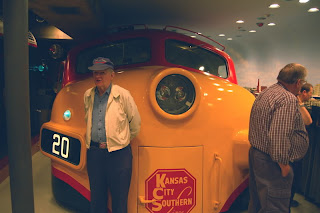 Muff, who lives in Washington state, models KCS in the late 40s to early 50s in HO scale. Entrance to his basement layout is through an entryway that looks like stairs leading down to the tracks at Kansas City Union Station. Entry to the layout room itself is through a KCS passenger car.


The car, which Muff describes as a mock-up, is a third of the size of a real passenger car. Inside, it features items from a real car.

Entry to car is through an operating sliding door; the car itself contains a roomette, buffet-lounge (complete with a table set with authentic KCS Roxbury pattern china and flatware), restroom (that apparently works) and a small museum. The exterior of the car also looks like the real thing.


Exiting the car through another sliding door leads visitors into the layout room itself, which is home to his magnificent model railroad--and to a real (as in life-size and not a mock up) KCS F7 cab. Nick rescued it from a scrap yard and had it lowered by crane into the basement when his house was under construction.

Unless otherwise noted, credit photos on this page to Dave Hikel, who took them during a 2008 visit to Muff's layout and posted them on a Model Railroader forum.
Posted by JDL56 at 7:56 PM