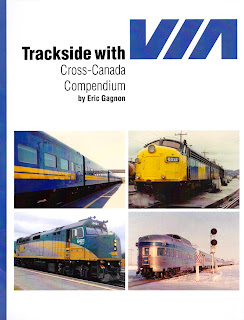 He’s done it again! After successfully publishing his first book about VIA Rail, Trackside with VIA: The First 35 Years, Eric Gagnon has released not one, but two new books about Canada’s national passenger railway.
The first new book, titled Trackside with VIA: Cross-Canada Compendium, covers VIA's history, operations and equipment. It includes more photos and information about VIA from B.C. to Quebec; remote services in Manitoba; RDC's in the Maritimes; and VIA’s named trains, special trains, rescue trains and hospital trains. 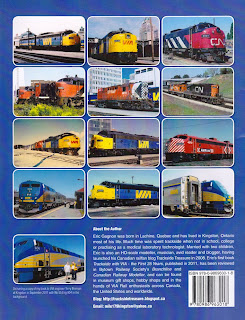 The book also contains information about VIA’s fleet, from F-units to P42s; the LRC, HEP and Renaissance programs; disposition of former VIA equipment; notable VIA derailments; what it was like to ride VIA in the 1980s; and details on the acquisition and rebuilding of locomotives and cars inherited from CN and CP.
With over 100 pages, it contains over 160 black & white and 60 colour photographs. The price is $30 to Canadian addresses and $35 to U.S. addresses (includes shipping).

The second new book is titled Trackside with VIA: Cross-Canada Compendium Consist Companion. It features consists of interest to prototype modellers and anyone who wants to learn more about VIA operations. Its 50 pages are divided into Western Canada; Eastern Canada; corridor trains; and station and train departure information from Montreal and Halifax. Price: $10 to Canadian addresses, $13 to U.S. addresses (includes shipping).


Click here to go to Eric's website for more information on ordering, detailed descriptions of each book, and a free preview.
Meanwhile, Eric has a few copies of Trackside with VIA: The First 35 Years available; check his website for info on getting that book, too.
You can read  my interview with Eric about his passion for VIA, and why he published the first book, here.