Now That's The Way to Move a Layout!


Non-model railroaders who visit my layout often ask: “What will you do if you have to move?”

I usually say that I’d just take it down and start over in a new house, like I did with my first layout. But now I might add: “Why, I'll hire a crane and a big truck, get a police escort, and also get the city to close streets and bridges so it can be moved to a new location--of course!”

That’s what happened in Oct. 24 to Harry Clark’s Indian Creek Valley layout. The 25 by 50 foot layout was moved 30 miles by Wolfe House & Building Movers from Nemacolin Woodlands Resort to Connellsville, PA., where it will be housed in a new coffee shop and display centre.

Clark, who died in 2011 at age 91, worked most of his lifetime on the layout. It represents the B & O in the Connellsville area in the 1940s-50s, featuring a three-track mainline, a 40-foot long yard and a logging line.

The layout was purchased several years ago by Terry Shallenberger, owner of Shallenberger Construction, who donated the display to Fayette County Cultural Trust. The layout was on display at the resort, but had to be moved to make room for a casino the resort is planning to build on the site. 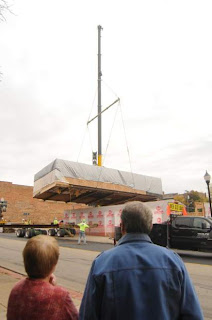 Shallenberger built the new home for the layout, which will look like the old Connellsville railroad station, and paid for the move.

About the layout, Shallenberger said: “Hopefully, it will get the town sparked. I knew the man put his whole life into it. I didn’t want to see it dismantled. I hope the canteen will help support it.”

The layout was featured in the December, 1985 issue of Model Railroader, and was part of the Allen Keller Great Model Railroad series.

Click here to read more about the layout and the move from Trib Total Media, from which the photos above were taken. Photos below of Clark's layout are from Videotrains Flickr page. 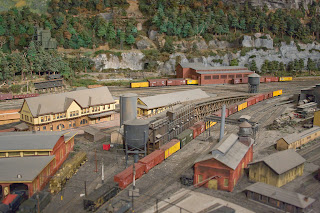 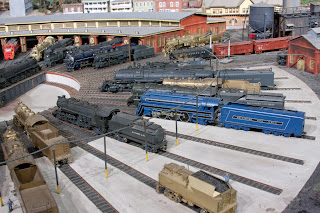