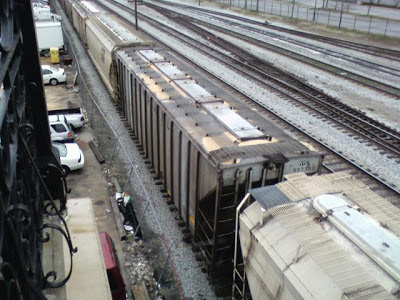 (Another in my new rewind series, bringing old posts back to the top, like this one from 2009.)

I was in Nashville, TN earlier this year. Luckily, my hotel was close to Nashville Union Station, and the CSX mainline. I took some time to explore the area, and caught a few trains heading under the Broadway St. bridge.

As one train traveled beneath me, I noticed spilled grain on a number of covered hoppers. I realized, at that moment, that this was something I had never modelled, or seen modelled, for that matter.

So I "spilled" some grain (Woodland Scenics yellow grass, actually) on a covered hopper or two, as below, using a bit of diluted glue to affix it to the car.

It's just a small effect, but I think it does an OK job of capturing a bit of the prototype.