I was railfanning in Mishawaka, IN in July, along the Norfolk Southern Chicago mainline, when I spotted a headlight in the distance—always a good sign. 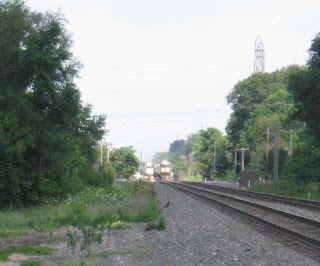 No, wait—it's two headlights. Could it be? I had never seen one train overtake another before, but was happening in front of my eyes. I zoomed in and saw that there were two trains traveling side-by-side. 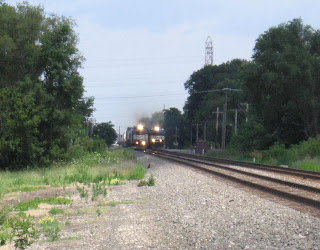 When I realized that the train on the north side of the tracks was overtaking the one on the south, I switched over to the south side for a better shot of the action. (I was at a controlled crossing). Darn it, though, my camera was still set on zoom, and I couldn't adjust in time before the train was right there—which is why I only got this partial frame. 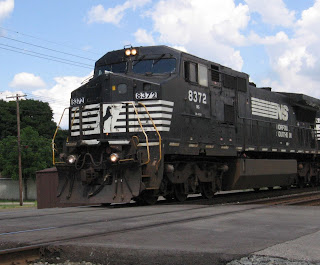 Then came the mixed freight, moving at a leisurely pace. 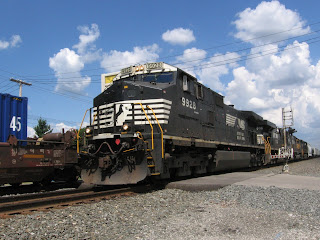 And then the units were past me, with the intermodal racing way out ahead. 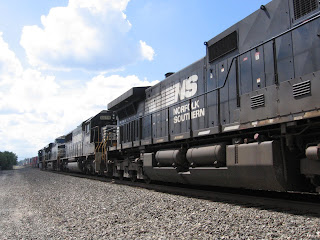 We see this kind of thing on modular layouts all the time. But does it happen in real life other places, too?

I posted that query on the Atlas Model Railroad Forum. Places where trains are permitted to pass each other on a double-track main include on the CN main line near Kingston, Ont.; Butler St. Jct. in Hamilton, OH (where the NS and CSX lines converge), and on the CSX in the Westland/Plymouth/Canton area of Michigan.

Amyone else seen something like this? It was a first time for me.
Posted by JDL56 at 4:21 PM