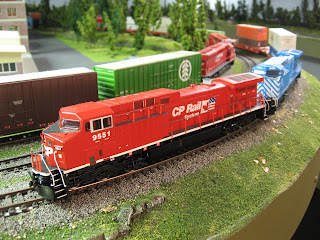 Will I "pull a Tony" and dismantle the layout?

The other week I had a friend over to run trains. He is just starting his layout. He commented about how much I must be enjoying mine, now that it is done.

I told him I had mixed feelings. On the one hand, I told him, I was proud of what I had accomplished over the past 16 years. On the other, I had to admit that I wasn’t as excited now about the layout as when it was still under construction.

His eyes grew wide. “You're not going to pull a Tony, are you?” he asked.

What he was asking—as I instantly understood—was whether I was planning to tear down the CP Rail M & M Sub., just like Tony Koester did with his Allegheny Midland layout, and begin again.

I had to admit to him that, yes, the thought had occurred to me, especially since I’ve discovered that I seem to actually enjoy building a layout more than running one.

Later, I sent Tony an e-mail about the conversation. “I get that a lot,” he replied, noting that he wasn't the first to dismantle a completed layout to build another one. “I blame McClelland, Hitchcock, Barrow (numerous times) and others for starting this trend!”

Will I tear down the M & M Sub. and start again? Anything is possible, I suppose. It would be a huge decision, and I don't think I have the courage to do it. At least, not right now . . .

Has anyone else got to this point with their layout, and then decided to start over?
Posted by JDL56 at 4:49 PM