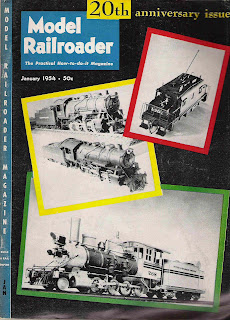 "In the early years," the article continued, "almost all hobbyists had to rely on mail order buying. Now almost all of us are a few minutes or a few miles of a hobby shop."

Skip ahead 56 years and it's back to the future; today many model railroaders use the Internet for their supplies, and the local hobby shop is becoming a thing of the past.

The same article noted the growing number of ready-to-run and pre-fab items and wondered if they had "gone too far . . . was the ready-to-use equipment and the too-easy kit harming or helping the hobby?"

Like Yogi Berra famously stated: "It's déjà vu all over again."
Posted by JDL56 at 5:11 PM