The Land Of Nod 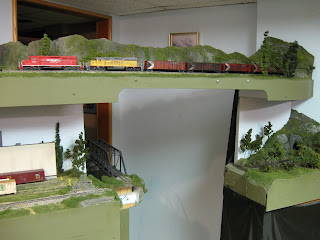 The nod-under on the M & M Sub. The swinging gate
for the lower level is open.

In the Bible, the land of Nod is the place where Cain was exiled after murdering his brother Abel. In popular use, the Land of Nod is a place of sleep, as in to “nod off.” It’s also used as a way to describe agreement, as in nodding your head to say yes.

For the CP Rail M & M Sub., it refers to the way visitors nod their heads to get into the layout room.

My first layout, the CP Rail Grimm Valley Subdivision, was a traditional around the walls, or donut style, layout. Entry was gained to the donut “hole” by crawling about three feet underneath the benchwork.

Suffice to say, it was no fun, not to mention undignified, and I think I still have the scars on my back from coming up too early.

As a result, I was determined not to have any duckunders in my new layout. But a nod-under? That would be OK. 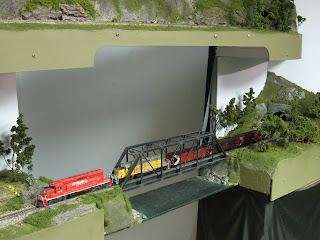 The lower level, with the swinging gate closed.

The upper level is about 62 inches high at the entrance to the layout room (157 centimetres for us Canadians). For all but the tallest adults, it means that people only need to nod their heads to enter the room.

That said, when visitors come over I put a paper sign on the nod-under that says "Duck!" It hangs an inch or two below the bottom of the upper level so that people can feel the paper if they don't nod far enough, or come up too early on the other side.

The lower level is about 43 inches high (109 centimetres); only a limbo dancer could get under that! For this reason, I built a swinging gate so people can get in and out of the room unimpeded.

Originally, it was just going to be a piece of 2 by 4 with track on it. But then a friend offered me a fabulous bridge, so I dropped the 2 by 4 about four inches and redesigned the gate to represent a river.

A simple bolt holds the gate in place, and joiners are slipped over the tracks to align them on the far (non-swinging) end.

On the swinging end, they simply line up with the track on the benchwork. Wires carry electricity to the tracks on the bridge.

(A drop-down or lift-up bridge would do the same thing; in fact, I use a drop-down bridge across the door to the storage room.)