Selling Brass, Or The Effect of Time Passing 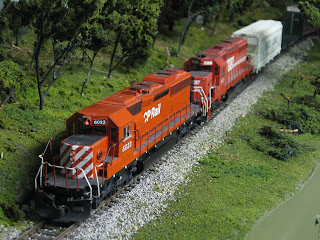 Athearn blue box locomotives on the CP Rail M & M
Sub.: Who would want to buy them in 10 years?

A friend of mine is dismantling his layout this summer, due to health issues. He plans to sell much of his rolling stock and locomotives. He shouldn't have trouble selling his freight cars—he models the 1950s, and his cars are exquisite models. But, as he acknowledges, he's going to have trouble selling his locomotives. Why? Most of them are brass, and the market for brass isn't what it used to be.

I can think of at least two reasons for the falling brass market. First, who can afford it? There aren't many people willing to drop over $1,000 on a single unit.

Second, why pay that much when you can buy great looking and running plastic steam locomotives at a fraction of the price? (And DCC ready or equipped, to boot).

But it's not just people with brass who will face challenges when it comes time to selling their model railroads. I can see a time when that will be my problem, too. In my case, it's not a matter of trying to sell expensive brass, but the opposite—tring to sell inexpensive locomotives and rolling stock.

The mainstay of the CP Rail Manitoba & Minnesota locomotive fleet are Athearn blue box units. Back in the late 1980s and early 1990s, when I acquired many of my locomotives, they were among the better running and looking models on the market. Today, of course, those units seem pretty crude next to more recent Atlas or Kato offerings. It doesn't help that none of them are DCC-equipped, either.

As for rolling stock, I do have some fine Atlas and InterMountain cars, but most of my freight cars are Athearn and MDC, with even some Life Like and Tyco thrown in. Again, as technology advances, these older cars don't stand up to more recent products.

All this to say that if I decide to sell my layout in five or ten or 20 years, people may prefer items that are much better detailed than what I have to offer. I might be lucky to sell my model railroad stuff for a fraction of what it cost, or is worth now.

Not that money is my main concern; I have never viewed model railroading as an investment. The hobby has paid itself back to me many times over in terms of enjoyment and satisfaction. My layout owes me nothing.

But, still, it is sobering to think that one day these models which I value so highly might be viewed as bargan-basement products—sort of like the way we view items made in the 1960s and 1970s today.

In the meantime, if you want some CN brass steam locomotives, I know someone who may be selling some soon.
Posted by JDL56 at 5:12 AM