Families and Model Railroading: A Compromise 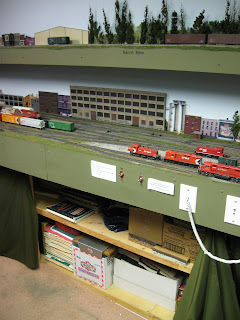 In an article titled “I wish I had a basement,” she writes about how she sometimes wishes she had a place for her kids to play, or a space for a rec room. But, she concludes, “as much as I envy those spaces, losing my basement does not mean as much to me as pursuing this ambition does to my husband.”

Of his efforts, which includes building a full-size version of a VIA passenger coach, she says: “I can’t help but be impressed. And yes, proud.”

In my case, model railroading has had a big impact. It influenced the choice of our two houses. To begin, it meant only a bungalow would do since that style of house has the largest basement. While house-hunting, the first place I always went was the basement. If I came up shaking my head, it didn’t matter how nice the kitchen was—we weren’t buying it.

Once in our houses, it impacted the amount of living space. In our first home, the layout took half of the basement (it was a small house). In our present home, it takes about one-third.

Of course, model railroading also affects finances; as a couple, we have needed to agree on a budget for the hobby, just as we would for anything else.

One way I have lessened the impact of my hobby on family life is by providing lots of storage space in my layout room. In essence, my layout is nothing but trains on top of shelf space—I started by building shelving, and then built a layout above it. Skirting--provided for me by my wife, as a birthday present one year--hides the storage space from view, and gives the room a neat and tidy look.

My brother-in-law took different approach; his Cougar River Subdivision (now dismantled) was one of the city’s largest layouts. But even though it was large, he lessened the impact on family life by constructing it on narrow shelves around the walls of his basement.

In his case, the layout went through the rec room, bedroom and other parts of the basement, but left lots of room for those spaces to be useable by others. (He went so far as to build his upper staging yard a foot below the ceiling, thus ensuring that the laundry area was still easily accessible.) See photos of his layout below.

In other words, it’s a matter of compromise—just like other things in families and life. In my case, it’s worked out fine. How about for you? 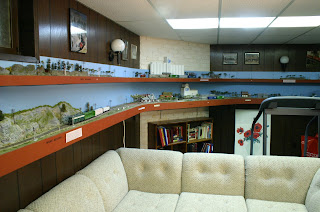 The family room: Room for the family and the
Cougar River Sub. 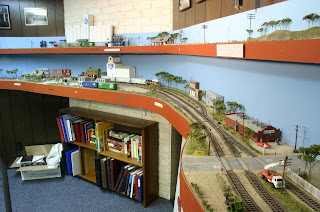 Another shot of the family room. 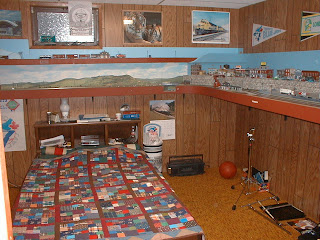 His son's bedroom. Wouldn't you have loved
to have had a room like that when you were
a kid? 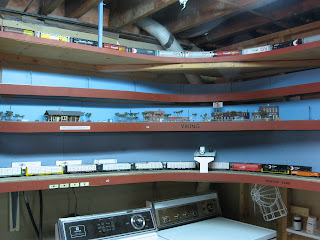 The laundry area: Room for the washer and dryer,
plus four levels of the layout. (I told you it was big!)
Posted by JDL56 at 6:17 PM