It was so ugly, I had to model it

It was so ugly, I just had to model it.

What attracted me to this unit was the hand-painted "CP" on the side--something that both makes it beyond ugly but also, in a strange sort of way, kind of appealing, too. I decided I had to make one for myself.

I made my unit the same way the prototype did. I started with an Athearn CNW shell, which I spray painted with primer. I then made a stencil out of masking tape for the unique lettering. I carefully drew the letters on the tape, then cut them out with an X-acto knife. I then affixed the stencil to the side of the unit, and used a brush to gently dab on white paint.

Photos of the prototype unit show it both with and without lettering on the other side. I chose the simpler route, and left the other side unlettered.

I didn't have any small CP Rail dry transfers to put under the numbers, but I did scrape off part of the second number 4 to match the prototype.

Is it perfectly accurate? No. But it's close enough for me, and a real conversation piece when visitors come over. 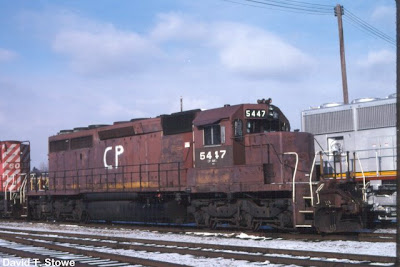 The prototype. Photo from Canadian Pacific Railway Locomotive Roster and Photo Archives. (http://www.trainweb.org/galt-stn/) Another photo of the prototype unit can be found at http://www.niagararails.com/diesel.phtml?id=7875
Posted by JDL56 at 6:48 PM