Nuns on a Train (and in an Amtrak ad) 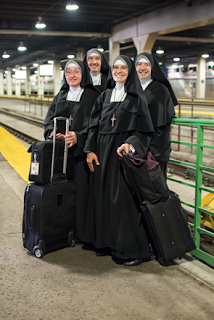 This past summer the U.S. media was captivated by Nuns on The Bus, a cross-country tour by 44 Catholic nuns to urge the U.S. Congress to pass immigration reform.

Now there's Nuns on a Train, as the photo on the Amtrak blog of sisters Selway, Raphael, Jognes and Marie shows (above).

The sisters were photographed at the start of their journey from New York to California by Brandon Stanton, the photographer behind Humans of New York.

Amtrak challenged Stanton to leave New York and capture Amtrak Stories from across the country. For 31 days, he is sharing one new portrait and story each day on the blog in celebration of people who ride on Amtrak.

Amtrak later turned the photo into an ad. 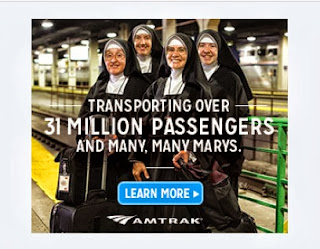 The four American nuns presumably had a more comfortable ride than the sisters napping on India's Vivek Express (photo below), the tenth longest passenger train journey in the world at 4,273 kilometres. 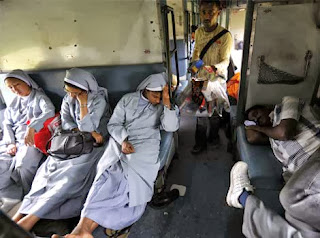 The longest journey, by-the-way, is the ride from Moscow to Vladivostok in Russia, at 9,259 kilometres. The Canadian, from Toronto to Vancouver, is the sixth longest at 4,466 kilometres.

Click here for a full listing of the longest train journeys.
Posted by JDL56 at 5:59 PM