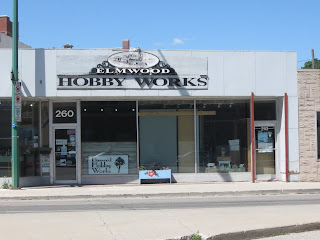 (I don't often write about death, and especially not two posts in a row. But life sometimes just works out that way; this week there were two deaths in the Winnipeg model railroad community.)

Sometimes, when a favorite institution closes, people say it's "like a death in the family." And so it is for the model railroading family in Winnipeg as Elmwood Hobby Works closes.

At one time, Winnipeg had six hobby shops, two of them all or mostly trains. I visited all of them, but Elmwood was my hobby shop. It was the kind of place to stop by and meet your friends, see what was new and browse the used bin--I found many treasures there.

Elmwood was started by Hilt Friesen and Vern Gibson in 1997. It started small, occupying a corner of Hilton's House of Interiors--Hilt's interior design and drapery store.


The business grew, and soon the drapery business was being pushed into a corner until, one day, it was completely gone.

"We started off small and we thought that was the way it was going to be," said Vern in a 1999 interview. "But people kept asking, so we kept providing."


The store was always a little ramshackle, and the building was old. And Hilt was "character"--he had his quirks, mannerisms, opinions and ways of doing things that not everyone appreciated. But I got along with him just fine.

Vern left the partnership a number of years ago, and Hilt died unexpectedly in 2008. Ownership of the store passed to his widow and daughter, neither of whom had any significant interest in model railroading or in running a hobby shop.

Slowly, like a patient with a chronic illness, the store began to wither away. Shelves and cabinets became emptier and emptier and customers fewer and fewer.


Then, the week of August 26-30, the official e-mail went out: The store is closing. No final date has been set, but many people stopped by August 29 for what felt like a wake (even if the patient wasn't quite dead yet).

Even if Hilt's family had an interest in the hobby, they would have had a tough go of it--the Internet is killing many retailers, including many hobby shops. (A list of Canadian hobby shops in a 1995 issue of Canadian Railway Modeller shows 86 shops; in 2013 there are 51.)

Winnipeg is down to four, only one of which is all trains. That aspect of the hobby--the local hobby shop--is going away, and it likely isn't coming back.


For me, the loss of Elmwood Hobby Works will be more immediate and personal; no longer will I have a hobby shop near my home to visit. No more bumping into model railroad friends on a Saturday morning or a Thursday night. No more checking out the treasures in the used bin, buying that tube of glue or track joiners or even a new loco (I bought a few there).

R.I.P., Elmwood Hobby Works. You will be missed.