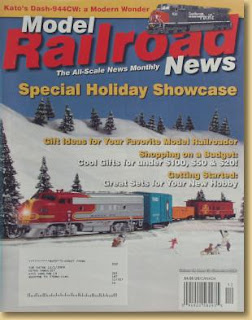 When he started Model Railroad News nearly 17 years ago, editor Michael Lindsay had a vision of creating a one-stop resource that would “provide quality news and content to help modelers of all scales and backgrounds make the most informed decisions they could prior to plopping their hard-earned hobby dollars on the hobby shelf.”
For many years, that vision was realized. Then this thing called the Internet took off, and publishing hasn’t been the same since.
This month, Model Railroad News ceased publication. In a note on the magazine’s website, Lindsay cited the various reasons for the closure: A down economy, declining circulation and rising costs.
As a reader on model railroad forum pointed out, it was pretty hard for a bi-monthly magazine to stay current with new releases—by the time Model Railroad News had published a review of a new item it had probably been dissected up and down and sideways on various Internet forums. (Maybe not always thoughtfully, but that’s beside the point.)

Plus, with more and more items being released in limited runs, what’s the point of a review? By the time the review was published, there was nothing left to buy, anyway.

These changing times of ours have brought many new and exciting opportunities, but also more than a few casualties. Model Railroad News was one of them.
So, goodbye Model Railroad News. And all the best to the few multi-scale, general purpose model railroad magazines left standing: Model Railroader, Railroad Model Craftsman (which just released its first digital issue) and Canadian Railway Modeller.
Posted by JDL56 at 6:25 AM