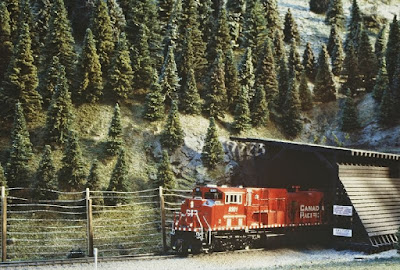 A couple people have asked for updates on the great HO scale Kicking Horse Pass layout (featured on this blog in 2010; see the post below.)

I tried contacting owner Jered Hoskins, but was unsuccessful. Fortunately, his friend Adam Meeks, who also worked on the layout, replied to queries about what has happened to it.

As Adam reports, the layout was dismantled when Jered's business moved to a new location. As for Jered himself, Adam reports that he isn't very active in model railroading at this time; there are currently no plans to bring the layout back out on tour.

As for online information about the layout, Adam notes that this is the only place to read about it, other than an article in a 2005 issue of Canadian Railway Modeller (Train 13, Track 6).

As for the future, Adam says he isn’t sure what the future holds; there was some talk of selling it a while back, but for the time being Jered has chosen to hang on to it.

One of the best layouts I have ever seen is currently stored in a trailer in Calgary.

Called the Kicking Horse Pass, the portable layout was the brainchild of Jered Hoskins, who created it with several friends.

The 24 by 42 foot HO scale layout features big, modern power, long trains, and the same jaw-dropping scenery of the prototype, including the world-famous Spiral Tunnels. 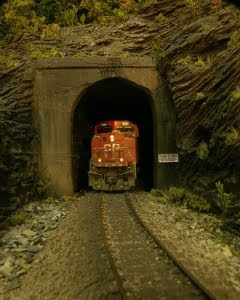 The layout premiered in November, 2002 at Calgary's annual Supertrain show; in 2005 it was part of Golden Rails in Winnipeg, a convention celebrating the 50th anniversary of the Winnipeg Model Railroad Club.

As Associate Editor of Canadian Railway Modeller, I was also able to work with Jered on an article about the layout that appeared in the magazine that year. 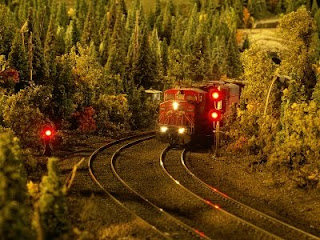 In addition to the Spiral Tunnels, the layout features a 12-foot high mountain, working signals, CTC dispatching, over 700 feet of track, real water in the river, a two foot-elevation gain, sound, and a double-tracked helix to enabled trains to complete the circuit behind the scenes.

Train length ranges anywhere between 25 and 50 feet, and the longer trains can be surprisingly heavy—some even require mid-train power. 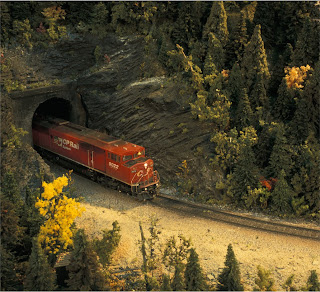 Putting all this in a basement would be challenging enough, but making the layout moveable was an added challenge—it pushed the limits of modular layout construction. 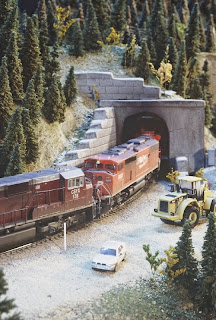 Weight was a concern, of course, yet the layout needed to be durable. This was resolved by constructing each module out of Styrofoam encased with acrylic stucco—the stucco provided a textured, neutral base for the scenery, and dried to the hardness of concrete. 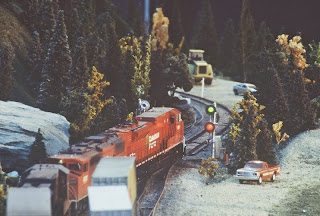 The modules sit on wooden frames that are secured with carriage bolts to help lock them in place.

It takes a minimum of eight hours for three people to assemble, level, and prepare the layout for operation.

Whether operating or just watching trains roll by, the Kicking Horse Pass layout offers an experience unlike any other. 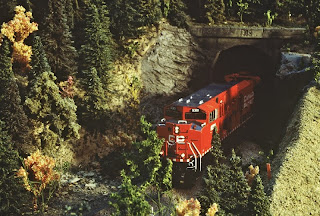