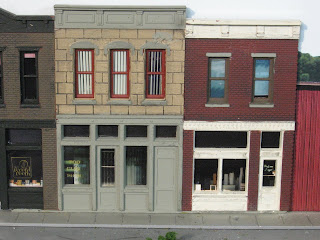 The finely-detailed (and realistically fake) interiors
on the M & M Sub. Those are real venetian blinds and
curtains in the second floor windows.

My hat is off to those who meticulously detail the inside of their model buildings—tables, chairs, machinery, people and so much more bring the interiors to life. I am amazed by their craftsmanship.

But what if you lack those kind of skills, as I do? Or if your buildings are mostly flats against a wall?

That’s the case for me, and for the CP Rail Manitoba & Minnesota Subdivision. Of the over 50 buildings on my layout, only 15 are modelled in three dimensions. The rest are a half-inch deep or less—no room for modelling an interior, even if I wanted to (or could). What to do? 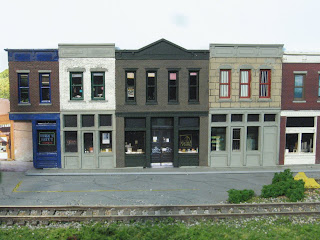 An overall view of the DPM kit with the real windows.

Fortunately, the prototype, as usual, has an answer.

The next time you are driving downtown during the daytime, look into the windows of various buildings on either side of the street. How far inside can you see? Two to three feet, at best, even if the lights are on. After that, it’s just dark.

When I made this discovery, it completely changed the way I thought of modelling building interiors. I realized I didn’t need to worry about making detailed interiors. I just needed to show the first few feet of the inside of the buildings. 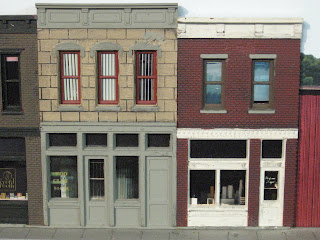 A close-up of the windows on two of the buildings; you
can only see in a few feet. Signs on the windows lend
a nice touch.

But how to replicate the prototype? My solution was to take use the real thing by taking photos of building windows. Through a bit of trial and error, I found that I could make HO scale-size windows by standing on the opposite side of a two-lane road (with two lanes for parking) and photographing a building on the other side. After developing the photos (use the glossy format for the best results), I cut out the windows and taped or glued them to the back of my building flats. (There is no clear glaze or plastic in front of the photos.)

Of course, with digital cameras and photo-imaging software, the guesswork can be taken out of this process; I developed it before such fancy gizmos became readily available. 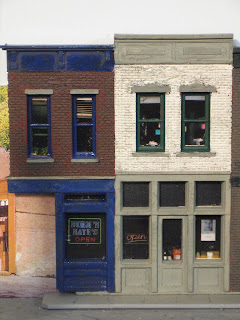 Another close-up; neon signs also show up nicely
using this method, as do posters and plants.

In addition to seeing “inside” a building, you can also get the signs and posters that proprietors place on the windows, along with the curtains, venetian blinds and other window treatments behind them—no need to add those, since they come free with the photographs.

In other words, nobody can look at these buildings and say they don't look real; they are, after all, the real thing! 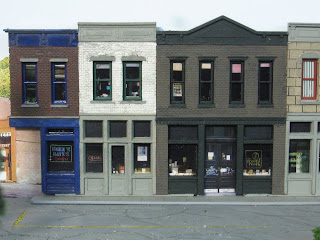 Even the green double door on the building on the right
is a photo! Note how you also get grafitti using this method. 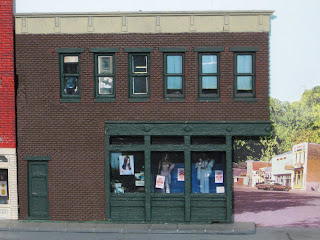 Mannequins in shop windows look great, too.
Posted by JDL56 at 8:07 PM