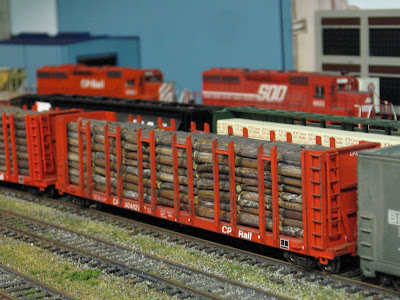 Recently, on a model railroad forum, someone asked if anyone knew of a manufacturer that made pulpwood loads for Walthers pulpwood flatcars.

I have to admit that my first thought was: Doesn’t anyone make anything by themselves anymore? Do we need to buy everything ready-to-run? Whatever happened to making things yourself?

But that thought was left unspoken. Instead, I described how I made my my own pulpwood loads, using ivy.

The ivy that I use grows on the side my house. It grows long vines with a tough, slender stalk. In fall, when the leaves die, the ivy needs to be pruned. These brown, lightweight stalks are perfect for making log loads for the Walthers’ cars.

For the loads themselves, I built a simple jig that enabled me to cut the stalks to uniform lengths. After they were cut, I glued them (with white glue) to the sides and top of the piece of Styrofoam. When dry, I touched up the “logs” with a bit of brown and black paint to simulate different shades of bark. I also added a twig or two to break up any uniformity.

Since the load is attached to the piece of Styrofoam, it is easy to take out when the car is returning empty from the paper mill.

Ivy stalks can also be used to load bulkhead flats which lack side pieces to keep logs in the car; see photo below. For this I glued the first layer of "logs" to a piece of wax paper; when dry, I added the rest, using the car itself as a template for the load. 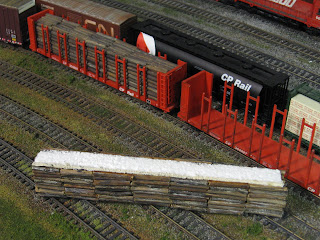 A bottoms-up view of the Styrofoam insert, with
the "logs" glued to the sides. 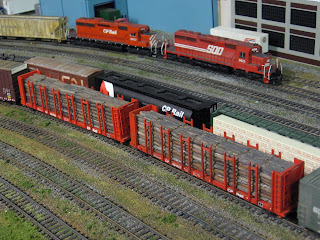 Another view of loaded pulpwood cars. 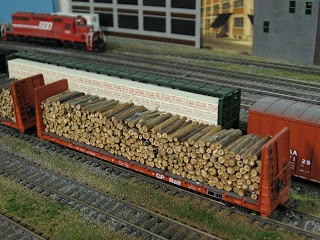 Ivy stalks can also be loaded into bulkhead flats.
Posted by JDL56 at 10:44 AM