A Little Bit Of Kitbashing, Or, Making Changes To The Rico Station 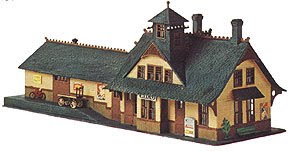 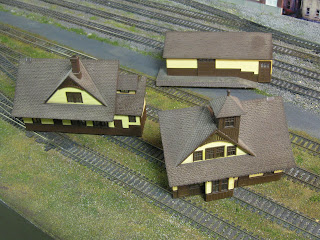 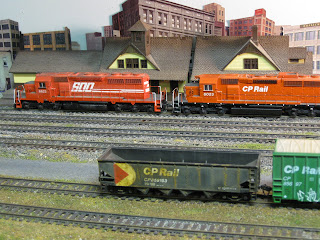 And ended up with this.

Many years ago, when I was building my first layout, I was lucky to buy a beautiful, put-together and painted model of the classic Rico station. It fit perfectly on that layout, and I intended to use it on my next layout.

When I built my present layout, the station found a home against the back wall in the Fort Frances yard. It looked great. Then I decided I needed a fourth passing track in the yard. But in order to add another track, I needed to get rid of the station—it was in the way. I was very reluctant to let it go.

Or did I really need to get rid of it? The station could stay—if it was half the size. But that meant cutting it in half, down the middle. Could I do that?

I decided to try. With some trepidation, I took my X-acto blade and hobby saw to the structure, cutting down the middle (along the roof line). I also cut the end walls in half. I then reassembled it against the wall.

Now, everything fits—the station and the extra track. Not only that: I have a unique structure, pretty-much guaranteed not to be found on any other layout (unless there's another brave soul like me). Plus, the station is also more imposing, given its new length.

As for the CP Rail Manitoba & Minnesota Sub., the route doesn’t actually see passenger service any longer, except for the occasional private owner’s train or VIA’s The Canadian, when it is forced to take a more southerly detour. On those occasions, the station is able to re-live its glory days. In the meantime, it provides a focal point for the yard, it’s also a bit of a conversation starter. (“Hey, what did you do that station?”) 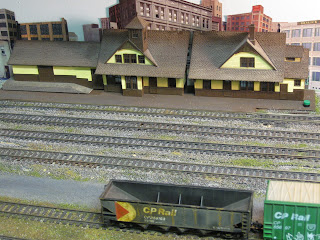 Another shot of the completed station.
Posted by JDL56 at 1:25 PM