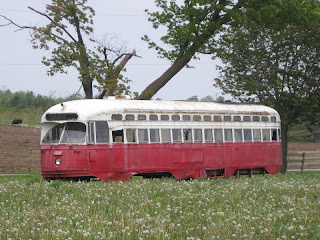 Near the town of Morriston, Ont., on Highway 6, can be found this interesting sight—former Toronto Transit Commission PCC streetcar 4427 sitting, derelict, in a farmyard.

It’s been there for 16 years, about the length of time I’ve been traveling that highway between Guelph and Hamilton while on business. 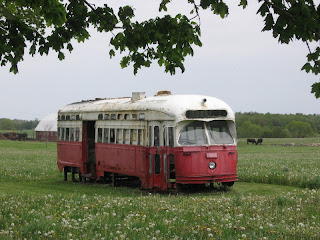 4427, a TTC A-7 class PCC car, was built in 1949 by Canadian Car & Foundry/St. Louis Car. Co. It was equipped for multiple unit operation, and ran paired with another streetcar in Toronto until 1980 when it was sold to a hotel in Brantford, Ont. The hotel closed in 1992, and 4427 was moved to another location in Brantford, where it served for as a refreshment stand. It hit the road one more time, moving to Cainsville, Ont., before ending up in its present location in 1996.

I spoke to one of the owners in 2002, and was told he hoped to one day return it to use as a restaurant—but it doesn’t look like that’s going to happen any time soon.

Sad as it might be to see it like this, at least its been “saved,” in a manner of speaking, and can be seen by travelers on the busy highway. 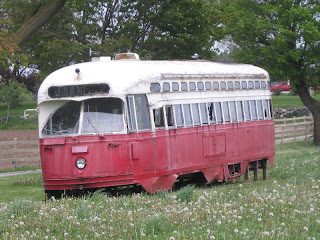