End of the Line for the Central Northern Subdivision


Nothing lasts forever . . . not even a model railroad. That's now true for George Myer's fabulous O scale Central Northern Subdivision, which I featured on ths blog back in October, 2011. George started disimantling it a month ago to make way for an N scale layout. 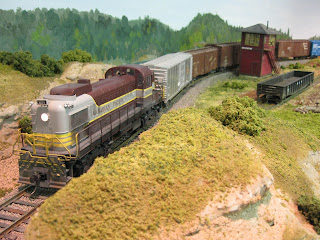 For George, the decision hinged around two things. First, in a year or so he and his wife will be looking to move into a condo--a basement-size O scale layout certainly won't fit! He's planning a modular-style N scale layout that he can start building now; later, when he moves, he will be able to take it to his new home. 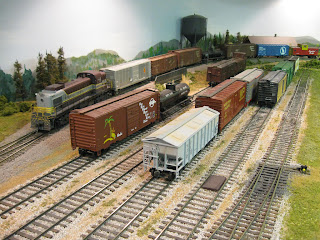 But the second reason had more to do with the style of layout. George designed the Central Northern Sub. as a point-to-loop layout. For operations, it was great. For just sitting back and running trains? Not so much. 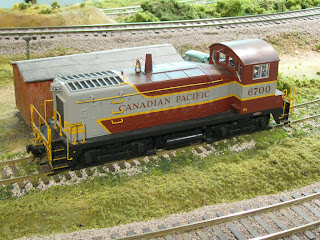 This is something I have heard from other modellers, and it's true for me, too. There are times when you just want to open the throttle and let 'em run--prototypical operation be darned. That's why the M & M sub., though designed as a point-to-point, has a loop on the lover level; I can work on a project and watch trains run around the room, or just enjoy watching them run with a glass of my favourite beverage. 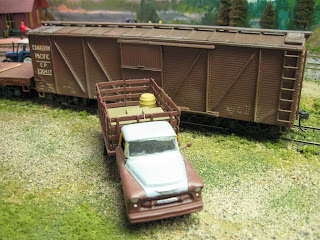 For George, a grandfather, the inability to let trains just run was most evident with his grandchildren, who didn't want to stop the train in the yard, move the engine to the other end, then head out again. They just wanted to see them run--something he plans to do on his new N scale layout. 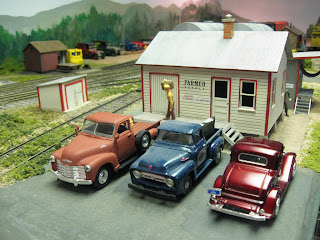 By-the-way, George's move into N scale is pretty amazing--he's legally blind. But, he says, you can do anything you set your mind to, and he's been able to change out N scale couplers. I'm sure the next layout will be just as amazing as this one! 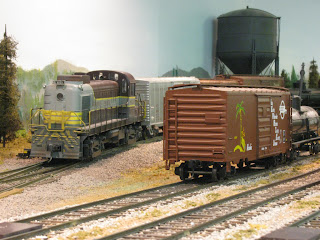 More photos of George's Central Northern Sub. can be found on my Picasa photo album.
Posted by JDL56 at 4:42 PM