Railways and Postcards (or can you say "Deltiology?")


People collect all sorts of things—stamps, coins, shaving mugs, beer cans and much, much more. (Some people even collect model trains, or so I hear.) Until recently, I was unaware that some people collect postcards—also called Deltiology.


A little bit of searching revealed that collectors assign postcards to periods such as the Golden Age (1898-1919), linens (circa 1930-1950), or modern (after 1940); the eras can also be divided into even more specific times according to the type of postcards (e.g. private mailing, divided back, white border, photochrome, etc.).

(A short history of postcards can be found at Shiloh Cards. A more extensive report can be found on the website of Seneca County, New York. Interestingly, many websites devoted to collecting postcards claim that it is the third largest hobby in the U.S. Coin and stamp collecting are, apparently, one and two.)


Postcards are collected by individuals, but also by historical societies, libraries and genealogical societies. Of particular interest to historians is how postcards show how cities and places looked at a particular time.


For model railroaders, postcards are a similar source of information—what did that old station look like in 1940? A quick Google search shows there are many postcard images on the Web; some for sale, some just for showing off.

For those who model western Canada, one of the best is Prairie Postcards, a service of the University of Alberta. They have over 15,000 postcards on their website—like this one, taken sometime before 1920 at Slave Lake in Alberta. It was sent by Harold to his wife. 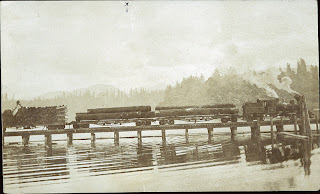 The message says: "Dear Wife, A little P/C for you this time. This is a photo of our little loco on the trestle with a load of logs and shingle [bolts]. You noticed the [lap] just throwing off a bolt. Photo take by Heap. Son of the Great Mogue & Manager at Ruskin. Good photos & a source of revenue for him. They sell in [camp] here like hot cakes at 10 [cents]. Gives you a good idea of scenery here . . . I'll send you p/cards of any thing interesting when I can get them no more on this, love from Harold." 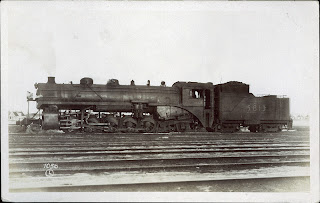 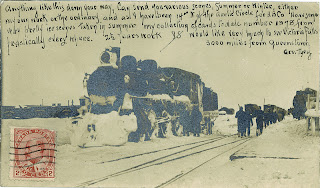 This one shows a winter scene in Winnipeg in 1906. The sender didn’t have enough room, so he wrote on the front; on the back, it says: "We are in the heart of our winter season with plenty skating, sleighing. I am sending you a card of my own work showing a C.P.R. Engine after a run of 130 miles from the west. I took on New Year’s day 1906 in the mammoth yards of the CPR in Wipeg." 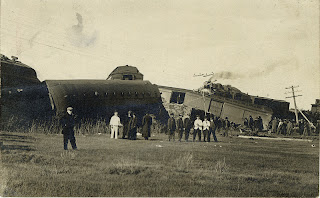 Back before the Internet, postcards were a way to share newsworthy events, like this derailment near Carberry, Man. Says the message: “Hello M - Am writing you soon - This is derailment of Imperial Ltd. no. 2. Just west of me a few miles (June 6th) Quite a tie up over 12 hours. Put 10 psgr. trains by here following day in 1 hr & 10 mins. Going some, Write, H."
It’s all fascinating stuff. But sometimes we can look at postcards just for fun, like the following.  Enjoy! 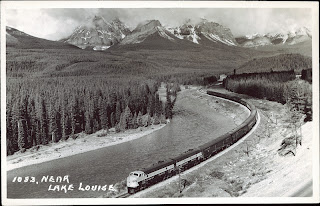 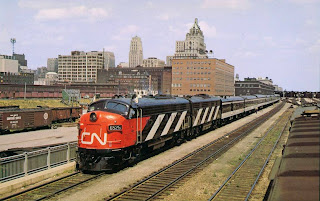 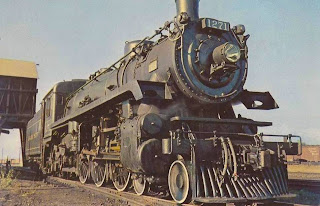 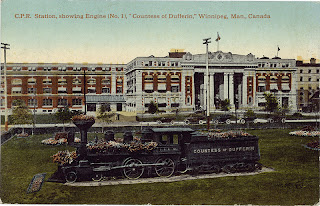