Not Enough Space for a Layout? Didn't Stop This Modeller! 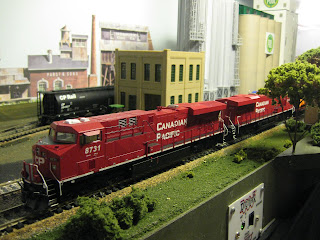 One thing many model railroaders want is more space. What they mean by that, of course, is horizontal space—a longer or wider room.

That’s not the challenge facing Dennis Rietze. The Winnipeg modeller would like more space, too. But the kind of space he’d like is vertical—as in more headroom.

Dennis lives in a split-level house. The part underneath the raised part contains the rec room; no room for a layout there. There’s a basement underneath the large living, dining room and kitchen area, but here's the thing: It’s just 52 inches high.

For many modellers, that would be a problem. But not for Dennis. He went ahead and built his HO scale Silver Springs Railway & Transportation Co. in that unique space.

Having a ceiling that low does mean some changes from normal layout building. For one thing, the benchwork is just 30 inches off the floor.

For another, the only way to easily get from one end of the layout to the other is on wheeled stools—the kind that mechanics use. The adjustable stools feature a tray above the wheels for tools. (Got to look out for that lower duct work while wheeling through the layout room, though!)

To run or work on the trains, Dennis scoots around the layout. Interestingly, one of his main helpers is Ian Plett, who also found a unique place for his layout—in his truck cab. 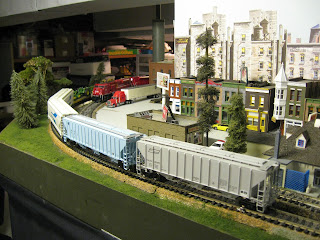 What Dennis has done goes to show that a layout can be built almost anywhere, if you’re up for the challenge—and he's built a Great Canadian Model Railroad, at that!


For another layout operated while seated, see Doug Tagsold's Terminal of Toledo model railroad.
Posted by JDL56 at 7:24 PM