All Aboard the Grey Cup Express 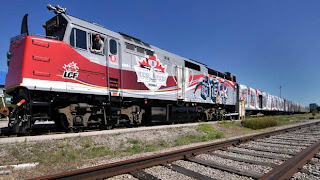 The NFL’s Super Bowl is better known, but the Grey Cup—the trophy awarded to the champion of the Canadian Football League—is older. And now it has its very own train!

This year the Grey Cup is marking its 100th anniversary with a cross-Canada train tour called the Grey Cup Express. The train, which left Vancouver September 9, will visit 100 communities across the country, including stops in all eight CFL cities. 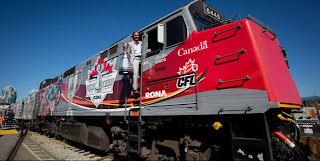 The Grey Cup Express features a locomotive and three cars, all wrapped in football images. One car holds the Cup, a second features a traveling museum about the league, and the third contains a replica locker room and information about the league’s teams.

As for the Grey Cup itself, it was commissioned by the fourth Earl Grey, Canada’s Governor General from 1904-1911 (hence the name of the trophy). It is awarded every November at the Grey Cup game—also known as the “grand national drunk”—which pits a team from the east against a team from the west.

The Grey Cup is the second oldest trophy in North American professional sport after the Stanley Cup. It has been broken on several occasions, stolen twice and held for ransom once.

For my American readers who may not be familiar with the CFL, there are differences between it and the NFL. For starters, the field is larger: 110 yards long by 65 yards wide and the end zones are ten yards deeper.

Other differences: CFL teams have 12 players on each side; teams only get three downs to go ten yards; the offence only gets 20 seconds between plays; all offensive backfield players, except the quarterback, may be in motion at the snap; and the football is slightly larger. (Leading to the infamous marketing slogan: “Our balls are bigger.”)

Plus, the CFL now has its very own (real) train. 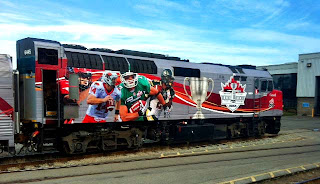