A Visit to CN's Symington Yard As noted before on this blog, Winnipeg is a great railway town. Both of Canada’s transcontinental railways travel through the city—at one point, just a few hundred yards from each other as they cross the Red River.

Both railways have major yards in Winnipeg. The CPR yard is located downtown, where it has been since the 1880s, and is once again the subject of debate in the media about whether it should be moved. The CN Symington yard is located outside the city. 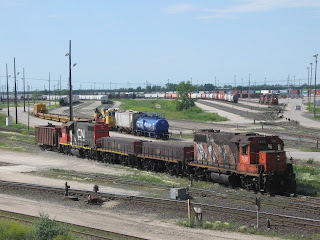 Symington yard receives trains from Rivers Sub to the west, Reddit Sub to the east, and the Sprague Sub to the southeast (towards the U.S.). Built in 1962, it replaced three other yards in the city, including the East Yards, now the location of a popular tourist destination called The Forks.

Although Symington, like most yards, is off limits to railfans, it is quite easy to see from public roads. A bridge crosses over the Sprague Sub and the yard’s southern leads, providing great views of the hump’s action—as seen in the photos on this page, taken earlier this summer when I visited the yard. 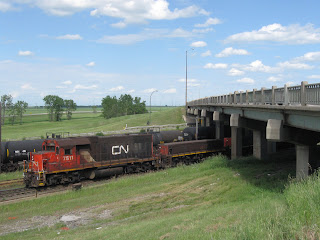 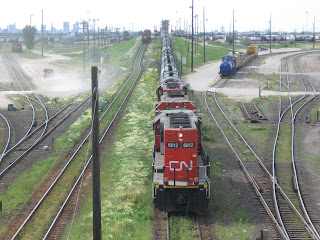