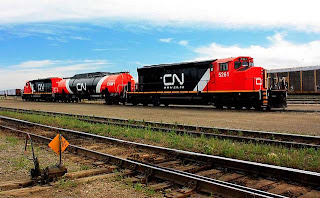 Canadian National is doing what comes naturally when it comes to powering its locomotives: Natural gas, that is.

In late September Canadian Press reported that CN is exploring the feasibility of using cheap and relatively clean natural gas to power its trains.

Two locomotives have been retrofitted by the railway to run on natural gas; they are being tested along with a specialized tank car along the stretch of track between Edmonton, Alta. and the key energy processing and pipeline hub of Fort McMurray. 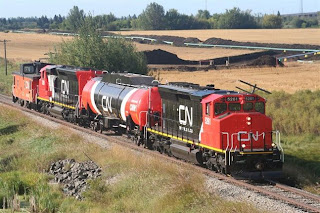 According to CN, natural gas is currently cheap and plentiful in North America, so there are likely cost benefits to the railway as well.

The experiment reminds me of what Burlington Northern did back in the 1980s, when it used fuel tenders in helper service in Wyoming. Tank cars served as auxiliary fuel tanks for the locomotives; fuel was transferred through fuel lines spliced between two or more units. They typical helper set was two SD40-2s spliced by a fuel tender. 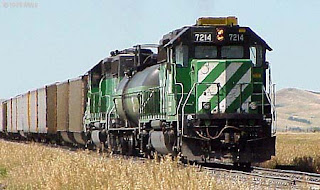 According to the website Mountain West Rail, the fuel tenders were introduced because there were no refueling facilities in any of the yard facilities in the area, and because they allowed the railroad to purchase fuel at the least expensive location in the region and ship it to the helper district.

More info and photos on the BN fuel tenders can be found at Jim’s Junction.

The CN press release about the natural gas experiment can be found here.

Photo at the top of the page by Don Smith via OK the PK.  The other CN photo from Canadian Press. BN photo from Mountain West Rail.