Week of Remembrance II: A War Memorial on a Model Railroad Layout


Earlier, I posted about the CPR's "Angel of Victory" memorial, for the 2013 Week of Remembrance. Now for a look at how one modeller has added a cenotaph to a model railroad.

Joe Laroche is a skilled modeller and a member of the Selkirk, Man. model railroad club. He built the station for the club's layout, and added the cenotaph scene outside the station. 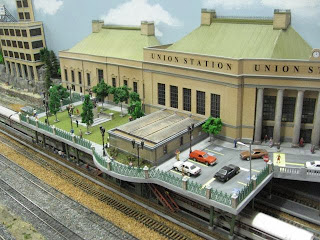 His station scene is similar to what the CPR did with its memorial outside of its stations in Vancouver and Winnipeg, and inside its station in Montreal.

Joe used the Walther's Union Station kit to make his flat-style station for the Selkirk club. For the memorial, he used military figures mounted on a plinth.

I have not been able to find examples of other model railroads with war memorials. At least two British manufacturers sell war memorial kits, though. 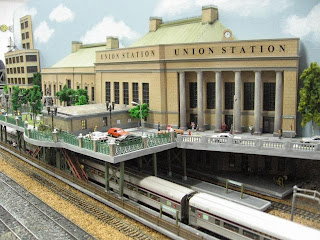