Tornadoes and Trains: Who Knew They Were So Popular?


I was idly Googling for storm cloud backdrop photos when I discovered them: Model Railroads that incorporate tornadoes not just into backdrops, but as moving, lighted 3D fixtures on layouts.

I have to admit I had no idea they were so popular. But a search turned up four examples, all on NTrak layouts.

Like the one at the top of the page from the 2008 World's Greatest Hobby show in Louisville, KY. I don't know which club owns it, but you can see a video of it here. Yes, the funnel cloud actually moves.


The United Northwest Model Railroad Club of Seattle, Washington also has a tornado on its layout. 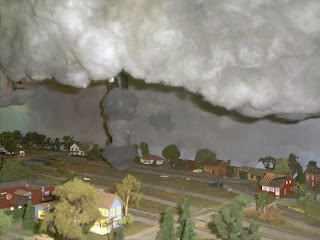 So does the NTrak of Bloomington, IL. 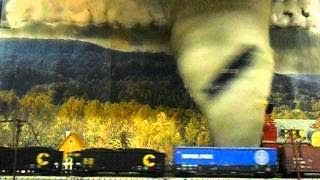 And so does the Frankfort, NY FunTrak. See a video of it in action here. The sound effects are real; there was a thunderstorm passing overhead when the video was taken.

I'm not sure about this; I understand the appeal of having something animated on a layout, like a tornado. But given their destructive power, they don't seem like the kinds of things I'd want to put on a model railroad.

Then again, someone out there has an NTrak module with a volcano on it . . . who knows where this could end?
Posted by JDL56 at 10:10 AM