In an earlier post, I wrote about the 1947 Friendship Train and how I had managed to collect almost all of the Mennonite Central Committee (MCC) boxcars that were inspired by it.

To re-cap: There never were any real MCC boxcars. The first custom decals were made by a Pennsylvania hobby shop in the 1960s after a paper cut-out was made for a children's fundraiser.

Later, Train Miniature made a version of this car as part of its popular HO scale billboard series, based on that paper cutout.

After that, other manufacturers got on board. Life-Like and Athearn offered models in HO, Con-Cor made one in N scale and Williams made one in O scale. I have managed to collect all the models except the Con-Cor version in N scale. 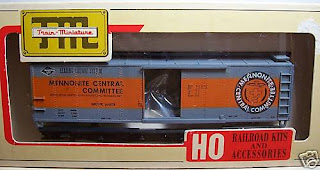 In 1995, when I was working for MCC, I collaborated with others to make new models of the car in HO and N to commemorate the agency's 75th anniversary. This included a new version with MCC's modern logo.

Later, another model railroader in Washington state made a Great Northern version of the original car.

One other version of the car was made—by me. It was a one-off; I made for a fundraising auction in Winnipeg. I never knew who bought it, or what happened to it.

I now work for a different international relief and development agency. Recently, while a colleague was cleaning out a recently-vacated office, he discovered the car in the photo at top. Since he knew I liked trains, he asked me if I would like it.

I was dumbfounded; after 18 years, the car I had made so many years ago was back in my hands (albeit a bit worse for wear).

The story behind the missing car is that someone who worked for my present employer bought it at that 1995 auction. When he left to work somewhere else a number of years ago, he left the car behind.

It languished in a hidden corner of his old office until now. I guess that nobody who used that office after him knew what to do with it, so they just left it alone.

But now it is back with me, and in my collection. Life sure is weird, sometimes . . . .

P.S. About that Friendship Train; two years after the end of World War II, France and Italy were still suffering from the effects of the fighting. Washington Post columnist Drew Pearson suggested that Americans should help people in those countries through something he called a Friendship Train—a train of aid donated by ordinary people.

In the end, 270 boxcars of relief supplies were donated to help people in Europe. In gratitude, the French created the Merci Train, which traveled across the U.S. to say thanks in 1949. The MCC boxcar was inspired by the 1947 Friendship Train.

You can read more about the Friendship Train and the Merci Train, and get links to other websites, in my original post.
Posted by JDL56 at 12:19 PM