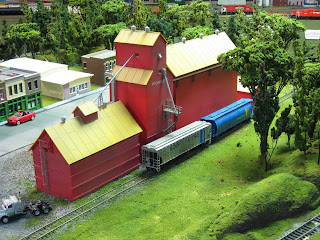 One person's loss is another person's gain. Or, in this case, one person's sale at a train show provided a treasure for the CP Rail M & M Sub.

Earlier, I shared photos of Arnold Walker's great Northland Route. Soon after taking those photos, Arnold began to dismantle the layout. At the recent Winnipeg train show, he was selling various bits and pieces, including his gorgeous scratchbuilt orange and yellow Pioneer grain elevator.


As soon as I saw it at his sales table, I knew I had to have it.

Where it once drew oohs and ahs at Arnold's layout, now it has pride of place on mine. To make room, I removed the Manitoba Pool and P & H elevators that formerly were in the town of Ritchie. And while Arnie had it serving two tracks on his layout, it services only one on mine.

After a bit of landscaping and adding the ramps to the unloading shed, it was ready to go.


It's actually better to have only one elevator in the town--the spur isn't that long, and the town isn't that big. (On the prairies, you knew how big and important a town was by how many elevators it had.)

As for Arnold, he's happy that a part of his former layout has found a home on mine. I am, too.