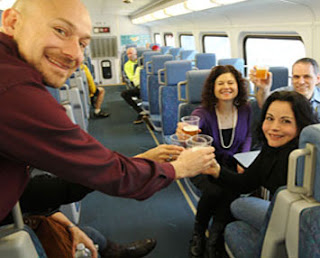 Google the words "beer" and "train" and you get lots of results--and not always what you expect.

One evening, I decided to search for information about trains that haul beer from breweries in Colorado--the so-called Beer Run on the BNSF's Golden Subdivision (which primarily serves to transport cars into and out of the Coors Brewing company).

As it turns out, that's not the only kind of beer train out there. And unlike the Beer Run, which transports beer in boxcars, there are other trains where beer can be consumed on board. 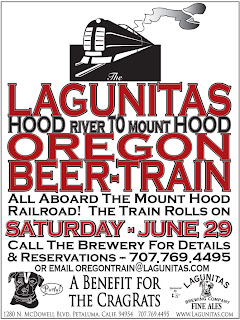 There's the LaJolla, CA Beer Train, for example. (Slogan: "Hops" Aboard the Beer Train!) Says the ad copy on their web page: "Join us on the Beer Train! Leave a low carbon footprint and enjoy ample tastes of local craft beers paired with the best of San Diego's food offerings.

The Rio Grande Scenic Railroad offers a beer tasting train. (Motto: "The ales go on the rails.") It features regional craft beers and food. It has a special run for Oktoberfest as well.

Still in Colorado, the Georgetown Loop Railroad offers a beer and brats train.

Modellers are not to be out-done; during the World Cup some football fans in Denmark didn't want to miss a moment of the action to get up and get a beer. So they built a model railroad to bring the beer to them. 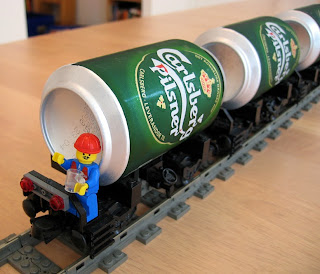 In the Czech Republic, there's a bar in Prague that uses trains to deliver beer to customers; click here to see a video. 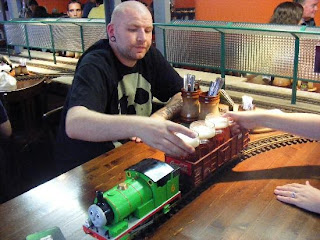 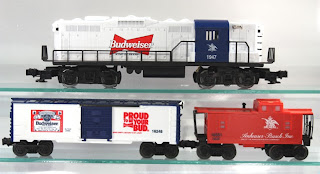 Finally, Chicago once boasted what may have been the only model train store and bar: Zientek's Model Trains and Tavern.

The tavern is reportedly gone now (the owner decided the cost of getting a license was getting to high), but apparently the model train store still exists at 22001 W 18th St. According to one reviewer, Zientek's is "like the living room and basement of a grandpa you never had." And at one time, you could also get a cold one.

Of course, there are also the special beer trains, sponsored by American breweries.

If this isn't enough, there's even a song titled Beer Train by Uncle Leon and the Alibis. Opening lines: "Beer Train! Coming around the bend. Can't you hear, all that beer, just a-rollin' and a-rumblin' down the line?" You can listen to it here on YouTube as Uncle Leon sings it on a New York City subway.

Finally, I thought I would create my own beer train. This being a Canadian model train blog, of course it would have to feature--what else?--a Canadian. 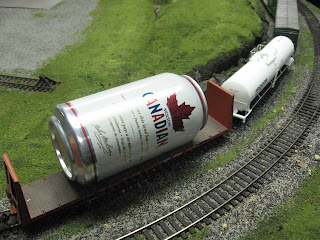