Putting the Die in Diorama: The Model Railroad-Inspired Art of Abigal Goldman 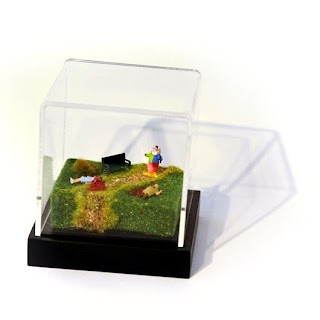 Earlier, I wrote about how Canadian artist Kim Adams used model railroad rolling stock in an art installation called Artist's Colony (Gardens), and how it was featured at the Art Gallery of Ontario.

Goldman,a former crime reporter for the Las Vegas Sun,  was inspired to created the art, called Die-o-ramas, after seeing a model railroad, replete with scale figures, on the Web.

"I look at figures that are designed to, say, mow lawns or wave at a train and figure out some way for them to do something else," she told the The Huffington Post. (In a section called, appropriately, Weird News.)

Now working for the Las Vegas Public Defender's Office, Goldman says when she saw the model railroad layout she thought to herself: "Oh, look at all the little people! Wouldn't it be fun to have them hacking each other in half?"

(A question you no doubt ask yourself many times when you are running trains on your layout.)

The 4 x 4 x 4 die-o-ramas feature corpses, shallow graves and improbable characters committing or experiencing mayhem, like the gunman in a pope costume, a decapitated man sitting next to his severed head, and a guy dispatching his victim with a lawn mower. 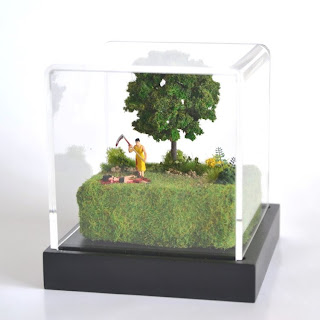 You may or may not be surprised to hear this, but her art is catching on; she has lots of orders for the die-o-ramas, which sell for between $90 to $500 through a Las Vegas gallery.

Some model railroad clubs have a special category for their shows where modellers make a diorama on a CD. Add a decapitated figure, some blood or an open grave and--who knows? Maybe you can call it art and sell it for big dollars.

You can see more of Goldman's model railroad-inspired art on her website at or at the Trifecta Gallery.
Posted by JDL56 at 10:25 AM