Lac Megantic Railway Disaster: A Time to Pause and Pray 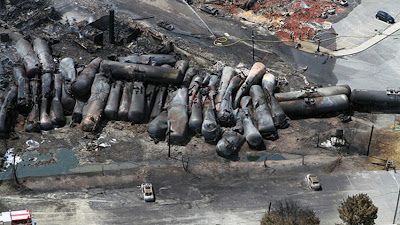 This blog exists to celebrate our mutual enjoyment of model railroading and trains in general. Although it touches on serious subjects from time-to-time, it mostly is about having fun with model and prototype trains.

But there is no fun or enjoyment in Lac Megantic, Quebec after a runaway Montreal, Maine and Atlantic train of tank cars filled with oil derailed in that community on July 6.

As of right now, 24 people are confirmed dead, and over 25 are still missing. A large section of the town was obliterated by the disaster. 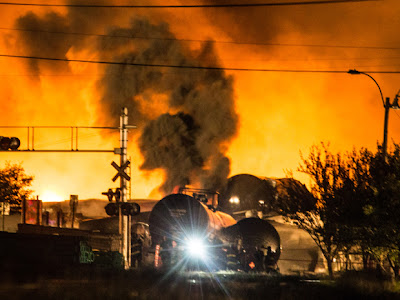 In the coming weeks and months, there will be plenty of time to seek answers and lay blame. Right now, it is only appropriate to pause and say a prayer for all affected by the tragedy.

As we all know, what happened in Lac Megantic could happen anywhere in North America. Trains filled with oil pass through communities in the U.S. and Canada every day--I saw several of them during a two- day trip to Fargo, North Dakota, all filled with oil from the Bakken field in western North Dakota.

Earlier in the week I watched them pass through downtown Winnipeg, my hometown.

It is only the vigilance of railway employees who keep us safe; one slip-up and the very worst could happen again in some other city or town.

Illuc irem nisi gratiam Dei haberem. There but for the grace of God go I--or we, in this case.