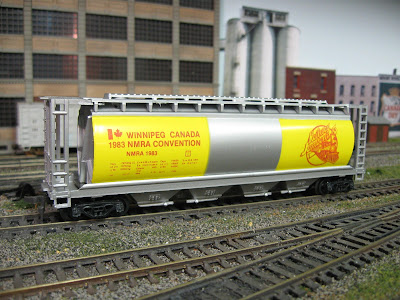 They're having fun down in Atlanta at the 2013 NMRA Peachtree Express convention. But 30 years ago this week the eyes of the North American model railroad world were on Winnipeg. That's when the city hosted the 1983 Railway Jamboree.

It was a pivotal event for me; I had been out of the hobby for eight years (due to studies, starting a career and getting married), and had just returned to Winnipeg from living in Europe. I came home that summer to find a model railroad convention right in my own hometown.

Although I didn't attend the whole convention, I did go to the public train show. The result? My love for model railroading, dormant at the time, was re-kindled; four years later, after more work and travels, I bought my first model railroad items. The rest is history.

A few years ago I found the commemorative car pictured above in the used bin at a hobby shop; I don't run it, but I keep is as a memento of that important occasion.

As for the convention itself, it was ground breaking in a number of ways. It was the first NMRA convention to provide a guidebook that fit into a shirt pocket, and it was the first to use daily graphs of simultaneous events.

Instead of tickets for individual tours, it offered coloured ribbons that attached to the convention badge with the current trip on top. It was also the first to have lapel pins to remember the event.

I have never actually attended an NMRA convention, although I did hang around the edges of the 2003 Maple Leaf convention in Toronto (the infamous SARs convention). And I have been part of two regional conventions in Winnipeg, and helped organize a 2005 national convention to commemorate the 50th anniversary of the Winnipeg Model Railroad Club.

They were fun, but that 1983 event will always have a special place in my heart. So, happy anniversary, Railway Jamboree, and thanks to all who planned it. It certainly had a positive affect on me.