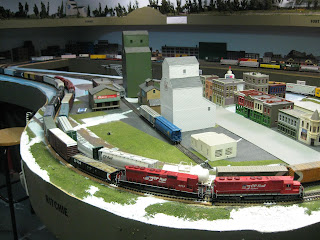 There's a new siding on the M & M Sub. After running the layout for a few months, it became clear that operation (such as it is for me) would be enhanced by the addition of another siding in the town of Ritchie.

The new siding allows me to get westbound trains out of the Fort Frances yard, clearing space for arrivals. Located just outside the entrance to the helix, trains can wait for eastbound trains (coming down from the upper level) to pass before making their way west to Winnipeg.

Adding the siding also meant reorienting the town, moving the elevators and eliminating one spur.

Speaking of which, I don't understand those who glue tracks down when doing their tracklaying. I'm never able to make up my mind about where the tracks should go until after I have run the layout for a while; I think I changed the Fort Frances yard a dozen times before settling on the present configuration. (Or maybe lifting glued track is easier than I think.)

As for the track itself, I lay it either on cut sheet cork (for the mainline) or directly on the extruded styrofoam for other tracks. I use half-inch finishing nails to hold the track in place, removing them after the track is ballasted. In all the years the layout has been around (18), I've never had any trouble with track shifting on the styrofoam before it was ballasted.