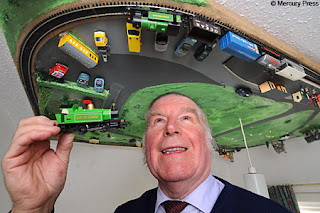 This is not an April Fool’s joke.
At least, I don’t think it is—although I checked the date on the Daily Telegraph article two or three times to make sure. (It was published Dec. 1, 2008.)

According to the article, Keith Beadle of Crewe, England, has found a way to help model railroaders who lack space for a layout—use the ceiling.

"I am always short of space for my layouts and it makes me a bit unpopular at home if I've got trains running around the living room,” said Beadle.

"So I looked at the ceiling and realized that it was an empty space just waiting to be filled.”

His system? An upside-down train that uses a series of carefully balanced magnets to hold the locomotives and rolling stock in place. It took him three years to perfect it.

"I started playing about with the idea and realized that we don't have to be restricted by gravity all the time,” he said, adding “when people see it for the first time it comes as a bit of a shock, but they soon get used to it.”

The system works thanks to a series of magnets on each of the locomotives and all the rolling stock. So far he’s made three layouts, including a figure eight.

"It is a question of getting the magnets just right,” he said. “It was trial and error at first but know I have got it down to a fine art."

Not only did Beadle invent the upside-down model railroad; he has patented it, and is looking for a manufacturer to turn it into a commercial product. (So far, no takers

He does admit there is one problem with the system; he hasn’t figured out yet how to incorporate switches—they interfere with the magnets.

"Space is at a premium these days in every home and that's why I think a model railway that runs on the ceiling is a winner,” he said. "I think it has got real commercial potential and the possibilities for applying it to all kinds models is virtually endless.”

Personally, I can see a few flaws in the system, beginning with all the neck problems you’d get from watching your trains. Real loads of coal or other materials are out, too, and ballasting will be a trick.

And if a train falls off the tracks—look out below! (Something that Beadle acknowledges has happened once or twice.)

On the other hand, you don’t have to worry about dust settling on your models—or worry about cats.

Click here to watch a video of one of Beadle’s upside-down layouts.
Posted by JDL56 at 7:14 AM