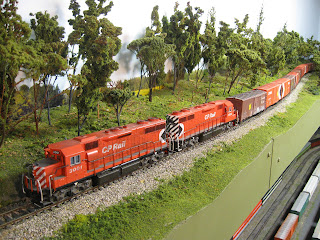 One of the unique trains on the Manitoba & Minnesota Sub. is made up entirely of 40-foot boxcars.

Hold on, you might say—isn’t the M & M Sub. set in the early to mid-1990s? Aren’t 40-foot boxcars mostly gone from the railways by that time?

Yes—and no. Yes, by that time 40-footers were mostly a thing of the past. But you could still find them on Canada’s prairies, being used in grain service.

Although covered hoppers had supplanted boxcars for grain service by that time, there were still a number of light-rail branchlines on the prairies where those cars couldn’t go.

Since it was cheaper and easier for the railways to repair boxcars for use on lightweight branchlines than to upgrade the roadbed, ties and rails to support the heavier covered hopper cars, CN and CP Rail decided to go with the less expensive option. Money from the Federal government helped them with their decision. 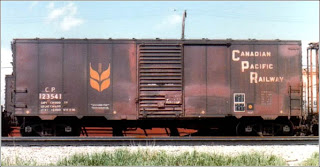 Cars used in this service were marked with a wheat sheaf chevron, to indicate their purpose and lading. CP Rail’s cars came in various versions—boxcar red with script and block lettering, and red with the MultiMark.

Both railways sent boxcars loaded with grain from the prairies to Vancouver and Thunder Bay. Additionally, CN used them on its former lightweight line to the Arctic port of Churchill, Manitoba.

Over time, the need for grain boxcars fell as branchlines were upgraded or abandoned. 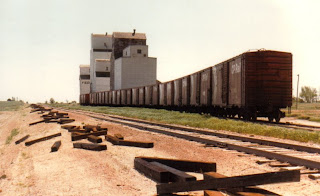 My train is made up of cars from various manufacturers, in boxcar red and red with the MultiMark. The wheat sheaf chevrons are dry transfers from CDS.

All except one or two of the cars were bought used; a few were repainted and re-lettered. It was enjoyable to scour used bins and trains shows to find cars suitable for the train.

Before putting the cars into service, all I needed to do was remove the roof walks, plug the holes and add the chevrons; that, plus weather them up a bit. 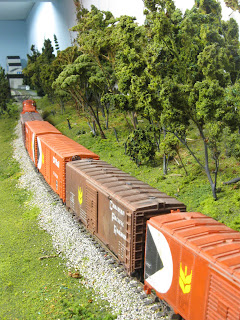 (To be accurate, the cars should have six-foot doors. Since my goal is plausibility, not realism, I didn’t worry about this discrepancy while creating my consist.)

Even though I model the modern era, I find I have an affinity for these shorter cars. Plus, it’s quite something to see a 27-car train of boxcars snake its way around the layout. 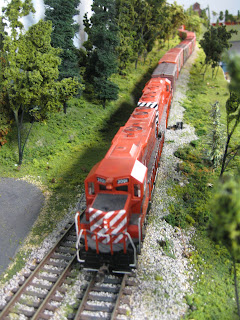 I’ve made a couple of videos featuring this train; the most recent features real train sounds—my first effort at adding the sounds of real trains to my layout videos. You can see it here.